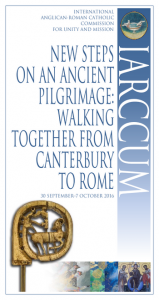 The bishops will arrive in Canterbury, England, for the first part of their meeting on 30th September. They will take part in the liturgical life of Canterbury Cathedral, and will make a pilgrim visit to the shrine of St Thomas à Becket, where Pope John Paul II and Archbishop Robert Runcie prayed together.

The bishops will travel to Rome on 3rd October. There they will make a pilgrimage to the tombs of the apostles, Ss Peter and Paul, and will participate in vespers celebrated by Pope Francis and Archbishop Justin Welby at San Gregorio al Celio on 5th October. This marks the 50th anniversary of the historic meeting between Pope Paul VI and Archbishop Michael Ramsey. At these vespers it is anticipated that the bishops will be mandated by Pope Francis and Archbishop Welby, in their ecumenical mission.

The purpose of the meeting will be to discover new ways in which Catholics and Anglicans can give greater witness to their common faith, and particularly how they can collaborate in mission to the world. The meeting will begin by listening to the bishops’ own pastoral challenges, and they will also reflect together on the previous documents of IARCCUM, in particular, Growing Together in Unity and Mission.

Information provided by Alive in the Spirit Conference Convenor, Lisa Bright. The online conference is being held 26 – 28 May 2022.

The 2022 funding round for the Tindall Foundation is now open. Applications are due Friday 12 August 2022.

Greetings to you all from Rome.