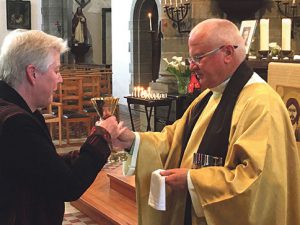 Fr James McMenamin, Catholic Chaplain to the Forces, was killed on 8 June 1917, during the second day of the Battle of Messines. As part of New Zealand’s centennial commemorations for the Battle of Messines, the Catholic Military Ordinariate and the Petone Parish remembered the ministry of Fr James McMenamin. Richard and Sharron Cole, from Petone Parish, and Fr Brian Fennessy, from Timaru, attended this year’s Commemoration Services at Messines, Belgium. Fr Brian Fennessy, Reservist Army Chaplain and Parish Priest of Timaru, pays tribute during this centennial year of Chaplain James McMenamin’s death.

Towards the end of May 1917, the British artillery opened up on the German lines around Messines. Allied tunnellers had also been working on deep tunnels over the previous six months. The Battle of Messines, which began on 7 June 1917, became a prelude to the much larger Third Battle of Ypres − better known as Passchendaele. In contrast to the eventual disaster at Passchendaele for the New Zealanders, the carefully prepared attack on Messines was a striking success.

In the early morning of 7 June several huge mines, which had been placed under the German lines by tunnellers, exploded. Almost immediately, New Zealand troops left their trenches and advanced behind a creeping barrage towards the ridge in front of them, on which lay the ruins of Messines village. Australian and British troops moved forward on their flanks.

The New Zealanders paid a heavy price for success: by the time the New Zealand Division was withdrawn on 9 June, it had suffered 3,700 casualties, 700 of them fatal.

Chaplain McMenamin was killed by shrapnel, while officiating at the burial of soldiers, on the afternoon of 8 June 1917; he was aged 43. Six other soldiers, who were attending the burial service, were wounded in the incident.

Fr McMenamin was initially buried on the day of his death on the approaches towards Messines Ridge by Fr Patrick O’Neill, from the Dunedin Diocese. However, on the following day his body was taken to Nieppe, near Armentieres, in France, and re-interred in the priests’ vault in Nieppe Communal Cemetery.

The New Zealand Catholic Chaplains had befriended the local clergy and the parish priest of Nieppe wanted to honour Fr McMenamin with a burial in the priests’ vault.

On the 100th Anniversary this year of his death the mayor, local parishioners and military associations honoured Fr James McMenamin with a Parade, a Memorial Service at his grave and a Mayoral Reception in Nieppe.

In the evening there was a concelebrated mass in the parish church in Messines; [Fr Brian Fennessy, Catholic Military Chaplain], Fr Dewulf Geert, a Belgium Military Chaplain, and the local deacon officiated. Members of the NZDF Cultural Group assisted with the music.

Fr McMenamin’s chalice, which resides in his former parish of Petone, was taken to Messines by the NZDF. This chalice, that had been used to celebrate mass on the Western Front, remained in Messines until the Commemoration for the Battle of Passchendaele during October.

Fr McMenamin had a renowned military ministry. He had left Wellington with the Main Body of New Zealand soldiers on 16 October 1914 and had landed at Gallipoli on 25 April 1915. During the journey to Egypt and then on the Gallipoli Peninsula, Fr McMenamin was of a great spiritual support to Lt Col William Malone. Colonel Malone often made reference to Chaplain James McMenamin; in his diary entry for 31 July 1915 Malone noted he had gone to confession to him. Eight days later, Colonel William Malone was killed during the Battle for Chunuk Bair. In reference to the August Offensive, Chaplain McMenamin wrote that, ‘I was up in the thick of it during those four awful days, and I hope I never see anything like it again’.

Due to failing health he was repatriated to New Zealand during September 1915, but was able to return to active service in mid-1916. After serving in England he went to the Western Front as chaplain with the Canterbury Regiment.

“The medical staff worked with untiring and inextinguishable devotion in alleviating the sufferings of the wounded and the Chaplains gave Christian burial to the fallen. Whilst engaged in these last solemn rites of the battlefield, a shell killed the Reverend J J McMenamin, a man of the highest character, unsurpassable courage and kindly disposition who showed to perfection that shrewd judgement tempered by charity of men and things, characteristic of the best type of Roman Catholic priest”.

His ecumenical ministry was also attested; after his death John Taylor and John Luxford, a former Anglican and a Methodist military chaplains recorded their tribute to Fr McMenamin’s dedication and service to the cross-section of military personnel.

A bronze Risen Christ, which previously belonged to St Michael’s Chapel at Burnham Military Camp, was installed and blessed by Cardinal John Dew, in the Wellington Cathedral on 14 July 2014, in memory of Fr James McMenamin, and all Catholic Military Chaplains, to recognise their ministry to the Forces.