An Anglican Archdeacon from Porirua, Jenny Dawson, is the winner of the inaugural crossword puzzle which featured in last month’s Wel-com. 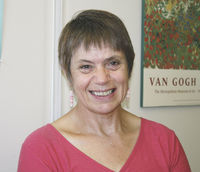 An interest in common elements of the Catholic and Anglican practice of the faith prompted Jenny to raid the internet and Wel-com to solve the clues Mary-Ann Greaney had devised to educate readers about pastoral areas.

Jenny came to Wellington from Christchurch five years ago having come to admire many leaders in the Catholic church in the south and has found an affinity through Catholic newspapers and magazines with the practice of the faith in Wellington.

On Ash Wednesday Jenny preached at St Theresa’s parish in Plimmerton where she and Fr Bill Warwick have shared many a service bringing adherents of both faiths together. ‘So I preached on what more can we do together and let’s not just make it Ash Wednesday.’

This was where she picked up a copy of Wel-com and discovered a way to research more about the Catholic way of doing things in the archdiocese.

Jenny says she always used to receive Wel-com from her father-in-law, Peter McAloon, from Blenheim, but since he died last year her regular supply has dried up.

She says she was ‘completely stumped’ by most of the questions because of the new pastoral structure.
‘And I picked this up and thought “I’m going to find out about this stuff”, and I just ploughed through the parish websites, in Petone and Naenae and it was really a nice exercise to do.’

The ecumenical theme continues in the area where Plimmerton is the centre with scripture study groups based on the common lectionary.
‘And they have a Retreat in Daily Life’ this year at their place so some of our parishioners are going to join that.’

She enjoys reading Wel-com not just for the local news but for inspiration for sermons and for sorting out issues that can be easily misunderstood. ‘I like to know what’s going on,’ says Jenny.