A widespread fear among beneficiaries that benefits will be cut amid changes to the welfare system brought many to a series of meetings the Alternative Welfare Working Group called last month.

Caritas, the Anglican Social Justice Commission and the Beneficiary Advocacy Federation set up the Alternative Welfare Working Group to enable more of a voice from benefit users to be heard in the context of the current review of the social welfare system. Caritas director Michael Smith told the Wellington public meeting that the key issue for Caritas was that the welfare system, in whatever form it takes, must treat people with dignity. 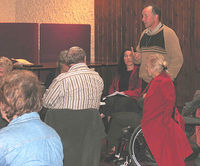 The Hutt Valley Benefit Education Service Trust (BEST) hosted the Upper Hutt meeting which heard many compelling stories from beneficiaries who were deeply anxious about the impact of potential changes on their lives. BEST coordinator Teresa Homan says the focus on getting sick and disabled people back to work needs to be better balanced by reality. ‘People aren’t made well by going to work. These are people who are off work because they are not well and just sending them back to work isn’t going to make them better. They need help with their health issues.’

One beneficiary, severely depressed after the suicide of three close family members, told the meeting she already feels a great deal of anxiety when the annual renewal forms arrive. ‘Who the heck is going to employ me? Give me some help to overcome this, or if you think I’m so work-ready, give me a job at WINZ.’

Another beneficiary recovering from work-related injuries, but transferred from ACC to a work and income benefit, said, despite the minister’s apparent focus on beneficaries returning to the workforce, he found the department did not reward his undertaking voluntary work. ‘Because I’ve done some voluntary camera work for the police, I’ve been penalised; it stopped me getting the invalids’ benefit.’

The caregiver of a disabled dependant adult said many in her situation are desperate to work. ‘They are often sole parents because the family’s broken up under pressure from a child’s special needs. Mothers find that, once the child has left school, the government provides only two days’ care per week. If they were in a home, the government would have to provide daycare from 9.00am to 4.00pm, but while at home, the parent is expected to provide or pay for the care. Most of the time there’s nowhere to go.’

A man who cannot drive because he has experienced epileptic attacks since he was 16 spoke of the difficulty of finding work without a drivers’ licence – even call centres had required a drivers’ licence to attend training. Despite this he had recently found work in an Upper Hutt factory, only to be dismissed on his 24th day under the 90-day trial provisions.’

A mother in Upper Hutt said she worried about what would happen to her adult child who has learning disabilities. ‘She has been sent on computer courses that are no use to her.’

A staff member in Hutt Hospital’s accident and emergency department said, despite a current political perception that sole parents and low-income workers were work-shy or taking inappropriate sick days, she sees parents who are unable or unwilling to take time off work to care for sick children. They come to after-hours and want them to ‘fix’ their kids straight away, the pressure from work is so huge. It causes so much stress that they send their children to school sick rather than take a sick day.

Group member, economics professor Paul Dalziel, told the meeting that when quality jobs in the economy are scarce, forcing sick people back to work may just make them sicker. The group’s chair Mike O’Brien, associate professor of social work and social policy, said he had heard stories of the demoralisation felt by disabled people being forced to search for work when many New Zealanders cannot find jobs. ‘There is a lack of acknowledgement that there are physical and mental barriers to making employment possible.’

The group would like to hear from people about the proposed welfare changes, particularly about what key principles the community thinks should underlie the benefit system and how these are or are not being applied currently. They welcome submissions until September 30. These can be made on line at http:// welfarejustice.org.nz or by mail c/- Caritas, PO Box 12-193, Wellington 6144.