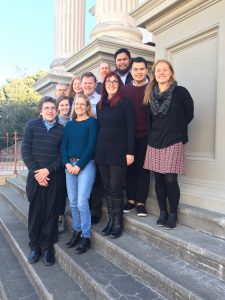 WelCom November 2017: The New Zealand Catholic Bishops Conference (NZCBC) announced on 27 September 2017 the appointment of David Mullin as Chair of their Council for Young People. The first meeting of the Council will be held 6 November this year.

The Bishops established the council to work with the Church, young people and with those who minister with them. They have tasked it with developing a national vision for Catholic ministry with young people, implementing national projects and working with dioceses and all faith communities to achieve this.

Bishop Steve Lowe said, ‘The NZCBC Council for Young People is an exciting step in working towards greater support for young people, their families and their faith communities. Dave Mullin has been a significant force in various projects that are foundational tools for today’s Catholic ministry with young people in Aotearoa. We’re looking forward to working with the council during this time of the Church’s focus on young people and enabling them on their faith journey.’

Pope Francis has committed to better understand young peoples’ lives, attitudes and concerns from around the world in the lead up to the Synod on Young people, faith and vocational discernment in Rome, October 2018. And in 2019, World Youth Day will be taking place in Panama.

David Mullin is employed by the Diocese of Palmerston North as a project manager and has worked for the Church for many years throughout Australia and Aotearoa New Zealand, particularly with young people. He was national project manager for the Journey of the World Youth Day Cross and Icon, Days in the Dioceses and the New Zealand pilgrimage to World Youth Day in Sydney 2008.

Each diocese will be represented by a member on the Council at its first meeting in November.