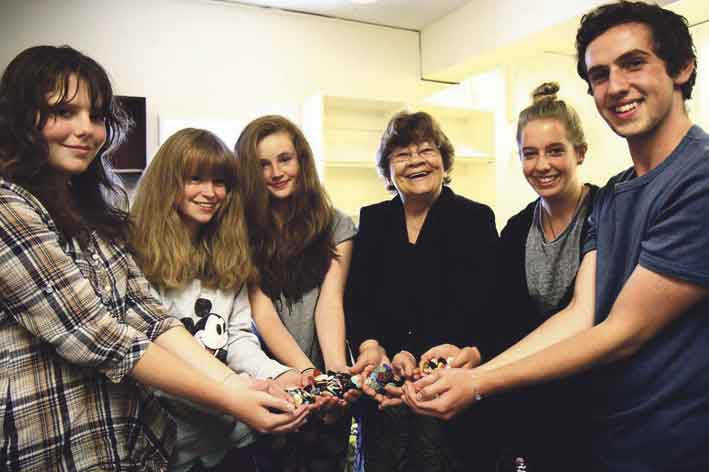 As children’s author Dame Joy Cowley added her button to the 1.5 million collected for the New Zealand Children’s Holocaust Memorial project, she said she had chosen a paua button, ‘because it reminded me that, although so many children lost their lives, they have not lost their loveliness, their innocence, their hidden talents … they have become timeless and we cherish them. They turn loss to undying beauty and exist now as a rainbow of glorious colour that captures our hearts.’

Those buttons represent the 1.5 million Jewish children who died during the Holocaust. They were collected from all around the world by about 25 pupils of Wellington’s Moriah College.

Joy Cowley, who is patron of the project, gave her button while visiting the NZ Holocaust Centre where the 1.5 million buttons are stored; and she also heard some of the former pupils themselves explain why they wanted to undertake the project, and how they did it.
‘It was done by children for children,’ they said. ‘We wanted to remember the children so that they are not forgotten, and teach people what happened so that it never happens again.’

Responding to their account and to the welcome from project leader Vera Egermayer – herself a child Holocaust survivor from Theresienstadt Camp – Joy said, ‘It is a spiritual law of the universe that emptiness following loss gets filled.

‘In the button memorial project, you are giving those children back their lives in a different form, the darkness of tragedy turned to the light of peace and they will go on educating children in generations to come.

‘Busloads of children will come to learn from the past and take that learning back to their homes and schools. They will understand, from history, the end result of bullying, and what happens when bullying is accepted and institutionalised.’

For the pupils who collected 1.5 million buttons, for project leader Vera Egermayer and the other project workers and supporters who were there, Joy Cowley’s visit, paua button and inspirational words were an affirmation that the NZ Children’s Holocaust Memorial project will have an ongoing impetus and successful conclusion.