When faced with natural disasters on the scale of the 2004 Asian tsunami, Caritas is equipped to take a two-pronged approach to cover both the immediate need and the long-term recovery. 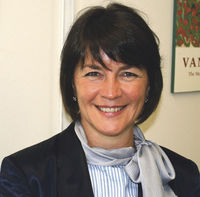 Caritas Internationalis secretary general Lesley-Anne Knight said in Wellington last month, that because Caritas is part of the Catholic Church which has many organisations on the ground in many countries, it is able to swing into action very quickly and also to stay to make sure a stricken country’s infrastructure is repaired.

‘We have a capillary of community networks—parishes and schools—so when a big humanitarian disaster happens, we’re there and the way we then work is coherent with the way we worked before. When you’re distributing tents or blankets, food or medicines, you do so knowing that you’re trying to ensure that when the whole crisis is over, people will still have the wherewithal to pick up their livelihoods.’

Another important role Caritas has is in advocating for the poor on behalf of justice.
‘If I don’t go and lobby governments about the 0.7 percent of gross national income going towards development aid (agreed to by UN member countries 40 years ago), if I don’t go along to them and say, “the fact that you give 0.3 percent of GNI to developing peoples but you’re spending 32 percent in arms, do you not see there’s something morally not quite right with that?” I’m not following through on the need to address the causes of poverty.’

On the question of the level of aid, Ms Knight uses the example, when talking to children, of giving a bread roll to a hungry person. When they return the next day, hungry again, the child asks what to do.
‘I need to give him bread today,’ and you say ‘I haven’t got it today,’ so the child asks, ‘well, what’s he going to eat?’ ‘What do you think you can do about it? Why do you think he hasn’t got bread today?’ Through this exchange the child learns that the handout, social service mentality doesn’t work because it’s not a good use of resources.

Children understand very well through the parable of the Good Samaritan the need to take care of the longer term issues.
‘If you say to them, “remember how the Good Samaritan took the wounded man to the innkeeper and said, ‘here’s the money to take care of him and on the way back I’ll come and check up to see how things are doing’, it’s the bit that says “I’m providing for somebody now because they’re in need—what I’m going to be doing is to check up to see what’s happening after you’ve taken care of him”—that is something that people can respond to when they realise that he focused on the long-term needs of the victim as well as his immediate welfare.’

Ms Knight says this longer-term need makes her role as spokesperson for Caritas Internationalis at the United Nations, the World Food Programme, the World Bank and the International Monetary Fund very important.
She says people want to hear the trusted voice of the Catholic Church and Caritas needs to lobby for people’s right, ‘To protection, the right for them not to be attacked, the right for them not to be in conflict areas, the basic human rights we all have to air, to water, to protection to shelter and you talk about it with them as something that is addressing the structural injustice of where they are. Even with issues like at the moment climate change, the economic crisis, the voice of Caritas must come in as a voice of justice.’