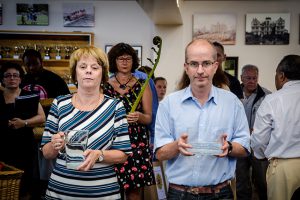 Symbolic gifts of waters from the harbour and the hills, sand from the shore, soil from the hills and ferns from our land, representing ‘our place’.

The new Parish of Wellington South was launched during a celebration that lived up to our new vision: ‘We are a community of joyful disciples, growing together and sharing Christ’s message’.

The parish formally came into being on 1 February 2016 after a transition team of people from all four South Wellington parishes had worked together for two years on the key issues. The team was made up of parishioners from St Anne’s, Newtown; St Bernard’s, Brooklyn; St Francis de Sales, Island Bay; and St Joseph’s, Mt Victoria. 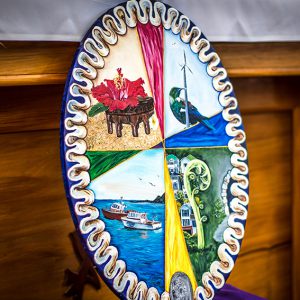 The Mass was full of symbolism. Baptismal waters from each church were processed to the altar and poured into one font, representing the coming together of the four parishes. At the presentation of the gifts a replica of the pram that Suzanne Aubert used to collect donated goods more than 100 years ago, was filled with groceries and wheeled to the altar.

The parish will take the name of Suzanne Aubert, founder of the Sisters of Compassion, when Aubert is beatified.

Another important part was processing the documentation gathered from a nine-week parish discernment held within the four communities last year.

Cardinal John talked of the new parish making a fresh start, and of doing so with a beginner’s mind. ‘Let us always be ready to share the pains, the cares and sorrows of others. That is what any member of the parish is called to do.’ He said it was a time of excitement and anticipation, of unwrapping the hidden gifts that all its people brought to the new parish. ‘When we look deeper…we find the beauty in our own hearts and in the heart of each person…. This parish will give life to each other.’ (www.wellingtonsouthcatholic.org).