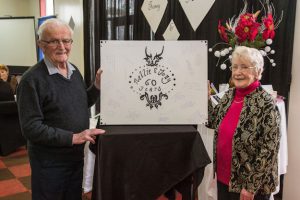 Nellie and Tony Rutten celebrate their 60th wedding anniversary with family, parish and friends. On the secret of their happy marriage, Nellie said ‘The Lord brought us together and He has kept us together’. Photo: Supplied

Nellie and Tony Rutten celebrated their 60th wedding anniversary at a special Mass and a parish event on Saturday 22 July. Held in high regard for their long and faithful love for each other and their commitment to St Columbkille’s parish in Woodville, they were joined by family, friends and St Columbkille’s parish family to celebrate at the Woodville racecourse centre.

Nellie and Tony grew up in different villages in the Netherlands and met in Galder in 1953. Tony set sail for New Zealand later that year, while Nellie stayed at home another three years until her father allowed her to follow her love. Waiting for his bride to be in his new land, Tony learnt new skills preparing for their future. They were married at St Patrick’s Church in Masterton on 20 July 1957. They moved to a farm job at Hukanui near Eketahuna and then to a farm near Woodville, which they later purchased and brought up their family of seven.

After working hard on their farm they retired to Woodville but became busy again with Tony on the staff at the racecourse and Nellie sewing at the possum-fur factory.

Through the Palmerston North Diocesan Renew programme for sharing faith in small groups, in 1986 Nellie accepted a leadership role in the Adult Biblical Independent Learning (ABIL) programme for three years. She also led a weekly Bible Study group for six years with a diverse faith-group of attendees from different Christian denominations.

Fr Bryan Buenger gave Nellie and Tony Rutten a special blessing for their 60th anniversary at the Mass.