Convent Old Girls Netball Club the oldest club still in existence in the Hutt Valley recently celebrated its 75th Jubilee at the Angus Inn in Lower Hutt with more than 100 past and present players and friends. 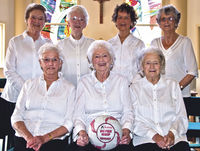 A long-time club captain, administrator and player in the 1940s and 1950s, Margaret O’Sullivan, gave a resume of the club’s history which became a valuable insight into the club’s heritage for some of the present players.

In 1934, Sister Mary Euphrasie RNDM, the then principal of Sacred Heart College, decided with Josephine Benton (now Walker) to set up Convent Old Girls Basketball Club so that the students leaving college could continue their interest in basketball (as it was called then) and their association with the college.

The club has had much to celebrate over the 75 years. Convent Old Girls is the only original club still in existence in the Hutt Valley. They have won many Hutt Valley basketball and netball championships with a number of seasons without a loss in the era of the Hutt Valley Basketball Association.

They have had players in NZ grade and age representative teams as well as North Island representatives and selectors at national tournaments. The club has also produced a number of Hutt Valley umpires and two New Zealand umpires—Lorraine Duffy as a NZ tournament and international umpire and Rita Barker as a NZ umpire.

In 1969 the club was the first in the Hutt Valley to throw out the traditional black gym frocks in favour of red skirts and tops and all agreed the players looked particularly smart on court.

In 1983 to strengthen the relationship between the club and Sacred Heart College floodlights were installed on all the college’s outside courts. A further donation was made to the college in 1997 when the gymnasium was opened and there is a room where the club can store its records and equipment.

The club is grateful to Sr Valerie Lawson, who was principal of the college in the 1980s and now Ms Lisl Prendergast for the continuing support of the club in allowing teams to use the gym for training.

Josephine Walker, now 93 years old, was unable to be at the reunion and Theresa May, Jean Evans, Gwen Barnes, Monica Brennan, Joan Hall and Kath Meachen were also missed. Some of the other early day players present were Sr Trish Hanaray CSB, Peggy Knowsley, Pat James, Veronica Williams, Marie Ingham, Lorraine Duffy, Margaret O’Sullivan, Rita Barker, Marie Walters, and Maureen Persico. Many players and coaches from throughout the decades came to share stories and re-live some of those on-court experiences.

All were saddened to hear just hours before the jubilee began of the death of Sr Mary Philomene Walsh RNDM. She was very much a stalwart of the club. Our condolences go to all the Mission Sisters and to Sr Philomene’s family.

Thanks to the jubilee committee—Rita Barker, Catherine McLauchlan, Maureen Fairweather and Katie Harris and their many helpers for making the night such a success.
Thanks also to Clare Warren who did an excellent job as MC for the evening and to Karen Joyce who prepared a fascinating film show featuring photos from the early days to the present.

As the club continues rebuilding, as well as nurturing the talents of some tiny tots soon to be running around, the future looks bright. If you wish to be part of the rebuilding please contact Katie Harris, 65 Bell Road, Lower 5010, Tel (04) 907 2555 or Sheree Lawrence shezlawrence@hotmail.com

Above: Rita Barker with the current team and holding a photo of the 1952 team.