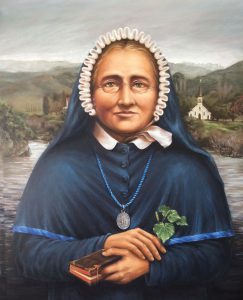 Bishop Charles Drennan is the liaison Bishop for Suzanne Aubert’s Cause. ‘Suzanne Aubert focused on the needs of others. This helps us also to celebrate a radical life of practical faith. Mother Aubert’s life shifts holiness onto our streets and fields. Hers is a gumboots ‘n sleeves rolled up type of saintliness that resonates both in this country and overseas, with growing interest in her Cause in France and parts of the Pacific.’

Last year marked the 90th year since Aubert’s death in New Zealand on 1 October 1926, after dedicating 66 years of her life to living among, learning from and walking alongside Māori as well as caring for the most vulnerable in society.

Marie Henriette Suzanne Aubert was born on 19 June 1835 in
St-Symphorien-de-Lay, near Lyon in France. In September 1860 Aubert, then aged 25, sailed to New Zealand on the General Teste with Bishop Jean Baptiste François Pompallier and a number of other Catholic missionaries recruited during his year-long visit back to Europe. Here, in New Zealand Aubert served the sick, orphaned, elderly and those ‘unnoticed’ by society.

She established New Zealand’s first soup kitchen that still serves almost 40,000 meals a year. She established orphanages for abandoned children and provided care for the handicapped, the sick and the dying. She was a pioneer of New Zealand’s health and welfare system and a friend to Māori throughout her life.

Sr Margaret Anne Mills, congregational leader for the Sisters of Compassion, said, ‘October 1 gives us the opportunity to rejoice in the faith-filled life of Suzanne Aubert and to dare to follow her example by taking the time to listen to the promptings of the Spirit. We can follow her example of complete trust in God who is with us in our everyday actions. Suzanne encourages us to listen, to trust and to be aware of the small miracles of grace that we receive each day.

Her wairua or spirit lives on in the work of the Sisters of Compassion and their co-workers. The Sisters today are still engaged in social work, pastoral care, prison and hospital chaplaincies, education, working with disadvantaged, migrant communities, and care of the sick and the elderly.

In 1997, the New Zealand Catholic Bishops Conference supported the first part of the formal process, called the ‘Introduction of the Cause of Suzanne Aubert’.

Visit www.suzanneaubert.co.nz for more information on Mother Suzanne Aubert and the canonisation process.