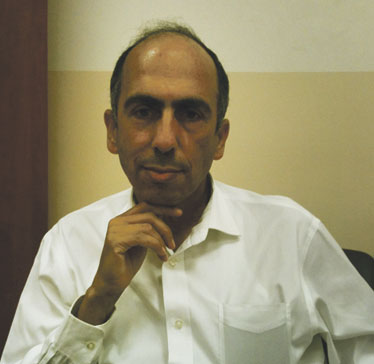 For the Palestinian people their land is a big cage out of which they cannot escape without a permit, granted only at Easter and Christmas, as well as in emergency cases, but then only until 7pm.

The eight-metre-high separation wall that surrounds Bethlehem has, since around 2004, prevented free passage for Palestinians to Jerusalem, – a 15-minute car ride away.  The wall has divided the families and some of them have the wall in front of their homes.

If Palestinians want to leave the country, they must go through Amman in Jordan. Tel Aviv, Israel’s international airport, is mostly off limits.

One correspondent who asked to remain anonymous says initially a prospective traveller must go to an office in Bethlehem to apply for a permit to travel through Tel Aviv.

‘If (the application is not successful), you have to have an alternative itinerary to go through Jordan.’

The system is complicated by the need for a magnetic card with which to receive a permit.

‘To get this, you have to wait for hours. I went at three o’clock. It’s humiliating the way they treat people. Luckily when I went there, there were three Israeli women from Human Rights Watch Organisation monitoring and, fortunately I got it in two hours. The men really get a hard time.’

Passage to East Jerusalem, which Palestinians regard as their capital city, is equally humiliating and many have boycotted going there for the past decade.

‘If I need to go to Jerusalem I have to apply for a permit – if I need to see a doctor, I have to have a medical report from a doctor in Jerusalem. Then they will look on my file and if I have a clean record, they will allow me a permit.’

The obstruction of passage can be life-threatening when a hospital patient needs to go to Jerusalem for surgery.

Nursing director of the Caritas Baby Hospital, Sr Erika Nobs, says a number of people have died because their treatment was compromised by the delay in getting their permit to go to Jerusalem or by a delayed passage through the checkpoint itself.

To transfer a child to Israel for special tests or treatment, the parents must first apply for their permit, and then the ambulance from Bethlehem takes the child from the hospital, to the checkpoint, where the patient has to be transported on a stretcher to the Israeli ambulance on the other side, even if they are in a critical condition.

‘In the 1993 Oslo agreement it is said the ambulances should move freely but this doesn’t happen. Only once an Israeli ambulance came to the hospital to collect the patient.’

An expert in nonviolent resistance, Mazin Qumsiyeh, has been arrested ‘many times’ trying to prevent the destruction of Palestinian homes and lands by speaking out against the Zionist regime or standing in front of bulldozers and by other physical acts of nonviolence.

Mazin is a professor of genetics at Bethlehem University where he runs a clinical laboratory, lectures in the use of cytogenetics and is helping to establish a natural-history museum.

He also writes about the Palestinian-Israeli conflict and has had two books published.

In pursuing a Zionist idea to take a country that was once 97 per cent Muslim and Christian and make it a Jewish homeland, Mazin says the Israelis have wiped out 530 Palestinian towns since the 1920s.

‘Those people are now living in refugee camps and in other parts of the region or the world.’

So people resist through civil disobedience, economic sabotage, boycotts, divestment among 198 other forms of nonviolent resistance.

The situation in Palestine is worse than South Africa under apartheid where the white minority government confined the blacks to bantustans because the government needed black labour, Mazin says.

‘Here the Zionists wanted to kick us out. When Israel decided in the late 1990s they couldn’t get rid of us, they put walls around us.’