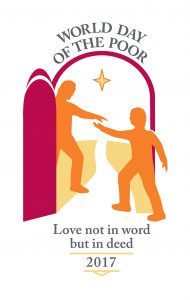 The World Day of the Poor is a new celebration on the Catholic calendar. Pope Francis created it at the end of his 2015‒2016 Jubilee Year of Mercy. In the document concluding the Jubilee year, Misericordia et Misera, the pope asked that Catholics celebrate this new celebration as a special day every year on the 33rd Sunday of Ordinary Time, which this year falls on 19 November.

Pope Francis said the idea came about during the Jubilee for Socially Excluded People, highlighting in particular the homeless, which took place at the Vatican in November last year.

‘At the conclusion of the Jubilee of Mercy, I wanted to offer the Church a World Day of the Poor, so that throughout the world Christian communities can become an ever greater sign of Christ’s charity for the least and those most in need.’

Pope Francis’ message for the first World Day of the Poor, released by the Vatican in June this year, is entitled ‘Let us love, not with words but with deeds’. It is taken from John’s first letter, in which the Apostle tells the Christian community of his time: ‘Let us not love in word or speech, but in deed and in truth.’

In his message, Pope Francis calls on Christians around the world to serve the poor with concrete actions that address their daily needs, writing that ‘service to them is an imperative that no Christian may disregard’.

Citing the examples given in the Acts of the Apostles and in several of the letters in the New Testament, Francis says service of the poor was ‘one of the first signs of the entrance of the Christian community upon the world’s stage.’

The Pope also reminds Catholics that they believe Christ is found in every human person.

‘If we truly wish to encounter Christ, we have to touch his body in the suffering bodies of the poor, as a response to the sacramental communion bestowed in the Eucharist. The Body of Christ, broken in the sacred liturgy, can be seen, through charity and sharing, in the faces and persons of the most vulnerable of our brothers and sisters.’

Pope Francis will celebrate Mass on Sunday, November 19, in St Peter’s Basilica. Afterwards, there will be a lunch for the poor, serving around 500, in the Pope Paul VI hall.

Go online to tinyurl.com/World-Day-Of-Poor to read His Holiness Pope Francis’ message for the First World Day of the Poor.

Caritas Aotearoa New Zealand and the Society of St Vincent de Paul have jointly produced a video on behalf of the Wellington Archdiocese for the First World Day of the Poor, available to view online https://www.youtube.com/watch?v=stuKQFuLO3A&t=35s