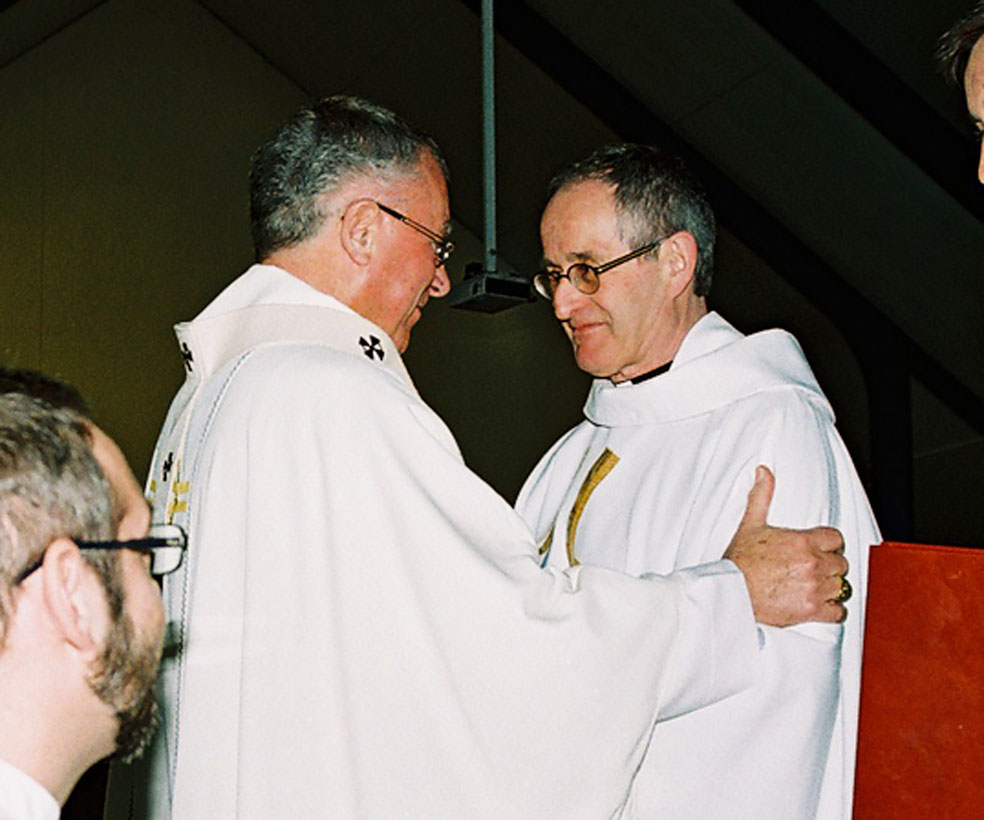 Doug Shepherd, ordained to the priesthood on 24 August, was first spotted in 2005 while part of the Anglican community of Seatoun Strathmore. His vicar there, Canon Deborah Broome, says Doug had a special quality, a ‘liturgical presence’.

‘There was something in him, something about his personality – the quite humble way in which he would put aside his own nervousness and do things for the benefit of other people. There was a quality in his spirituality.’

Deborah says Doug and his twin brother Mike played roles in the community there. Doug had been a synod representative and on the vestry. When the parish was changing the way it did things and the process of mutual ministry was under consideration in 2005, she knew Doug would be perfect.

‘We needed some people to be lay pastoral ministers. I said to Doug that I wanted him to be one of these. He was a bit nervous but he took a deep breath and said “yes”. And even back then I could see he had something. I’m not the slightest bit surprised that Doug has become a priest.’

Doug says when Mike’s wife died suddenly in 2000 and after their mother’s death in 2001, the Anglican community of St George’s in Seatoun and the Catholic parish of St Anthony’s where Doug was teaching at the school were both very supportive and the family felt a wellspring of love.

A teacher for more than 30 years and a principal and deputy principal on two occasions each, Doug says he became a Catholic because he wanted to be closer to the children he was teaching at St Anthony’s.

‘I was teaching seven and eight-year-olds. The eight-year-olds go on that journey to first Holy Communion. Mons [John] Carde was in and out of the classroom. I was not yet a Catholic but it was a joy because we could share our faith.

‘I can still feel their voices ringing in my ears [when they greeted Archbishop John Dew]. I did tangibly feel the presence of God.’ It was Mgr Carde who asked Doug if he had thought about becoming a priest.

Doug was born in Portsmouth, south of London and came to New Zealand in 1963.

He has an affinity with the Kapiti Coast, his family having settled in Paekakariki and Doug attending Kapiti College. He counts himself lucky that Archbishop John granted his wish to serve on the coast.

In 2008 when he started priestly training, he took his first overseas trip in 42 years to World Youth Day in Sydney. He said the warmth of Sydney people was amazing.

‘It is hard to explain but you can see God in other people and realise that God is also in you. At World Youth Day – God was there. And he was there through the death of two sisters-in-law and mother.’

He says he loves the sacraments. ‘I couldn’t wait to be able to celebrate the Eucharist and to anoint people. I was a bit worried about reconciliation but now realise it’s such a privilege.

‘I am in awe of certain things and I pray I never lose that awe.’