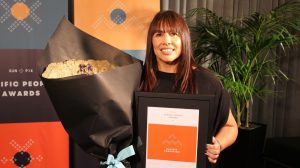 Gina Lefaoseu Deputy Principal at Porirua’s Holy Family School – one of only two people nationwide to be acknowledged in the education sector at the 2016 SunPix Pacific People’s Awards. Photo: Supplied

The awards recognise achievements of those with Pacific backgrounds who are making a substantial impact on the lives of all Pasifika peoples across the country.

The awards are becoming a leading forum to acknowledge Pasifika successes nationwide.

Gina received the award for the impact she is having on Pasifika education at Holy Family School in Cannon’s Creek and the wider Porirua community. This includes her work developing a programme called ‘The Family So’otaga’, which empowers families to take an active role in their child’s education and a critical stance on the New Zealand education system as a whole.

Gina was only one of two people nationwide to be acknowledged in the education sector.

Holy Family School has 180 students – 85 per cent are Pasifika, 12 per cent are Māori and there are a number of Burmese students. ‘I love the fact that we’re so diverse, say’s Gina. ‘The students bring a real warmth and richness from their cultures and that comes from their families. A lot of our students have the most amazingly supportive families, which is wonderful. I was born in Cannon’s Creek so feel like this is my home.’