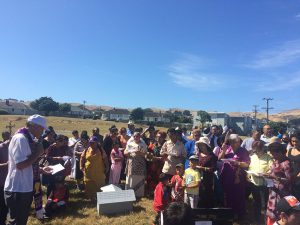 Mons Gerard Burns leads a Stations of the Cross and a housing reflection at Porirua in March this year.

‘Jesus came into the world homeless and poor. The Church wants to embrace everyone, and say that everyone has a right to have a roof over them.’ —Pope Francis

For the past 18 months, the Wellington Justice, Peace and Development (JPD) Commission have been advocating for better housing throughout areas in the Wellington Archdiocese. The Commission have spent time with church communities in Porirua, Lower Hutt and Upper Hutt attempting to better understand the housing needs in each community, and raise awareness of the issues affecting these communities.

The JPD Commission are concerned that sufficient, affordable and healthy housing near employment is lacking in many regions. Low-income families and children are particularly affected by this housing crisis. We are hearing stories that people are forced into overcrowded or inadequate housing, into sleeping in cars or vans, and the demand for rentals puts up the prices for those places even when they too are inadequate.

Raising greater awareness of this issue and taking action has come in a number of forms. During March this year, approximately 200 people took part in a Stations of the Cross reflection around Porirua. Monsignor Gerard Burns led people from the Holy Family Church throughout social housing areas.

Over June and July this year the JPD Group at St Joseph’s in Upper Hutt have been trying to stop the sale of a block of land in Trentham. The aim is to highlight to the community and political leaders about the need to keep this land in public ownership and to build further state housing on it, especially for low income families.

The commission has written to the Government to identify their concerns about the various blocks of state housing and public land in the Wellington region being on sale or to be sold for private use or development. The Commission argue that the provision of high-quality social housing is a way of both ensuring the common good and avoiding greater costs at a later time in terms of health, welfare and education needs.

Shane Olsen is chair of the Archdiocese of Wellington Justice Peace and Development Commission.