‘Lisa’ had run away from home at age 14, dropped out of school at 16 and was desperate for a home when she saw an ad offering work and somewhere to live. She was only 16, vulnerable, confused and desperate. This led her to sell her body for security, working up to 12 hours a day for as many as eight ‘clients’.

‘This was the biggest mistake I’ll ever make in my life,’ she told The Christchurch Press in July 2006. ‘There’s no glamour to it. It’s rough, it’s raw and it’s dirty.’

‘Lisa’ (not her real name) is a victim of the fastest growing industry in the world – human trafficking is equal with drugs trafficking and illegal arms dealing as the biggest international crimes. But trafficking in human beings is outgrowing drugs and arms because, whereas they can be consumed or used only once, people can be sold over and over again.

One in three women throughout the world is trafficked and children make up a third of trafficking victims in the United States.

Sr Catherine Ferguson from the United States told a group at the Catholic Centre in Wellington last month that to stop human trafficking, we have to stop the demand for sex. 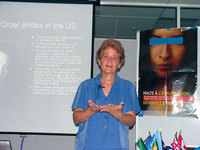 Sr Catherine is a sister of the Congregation of the Holy Names of Jesus and Mary and has campaigned at the United Nations for an end to human trafficking since forming UNANIMA with other women’s religious orders in 2002.

Her group’s mission is to stop the demand for trafficking, which she calls ‘slavery’, and they will launch a campaign to address this issue later this year.

The target is the treating of women and children as commodities to be bought and sold. It is an attitude which is encouraged by advertising billboards which use sex to sell products, or photos such as that featured on the front page of a national newspaper during the rugby sevens last month, showing ‘Playboy bunnies’ kissing a sevens team member.

The reasons for trafficking include the victimisation of people, globalisation, population explosion, corruption, sexism, the objectification of and violence towards women. 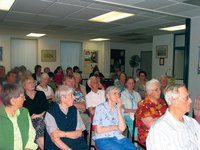 ‘One of every three women worldwide has been beaten, forced into sex or experienced another form of violence abuse.’ It is the attitude that allows this to happen at all that fuels trafficking.

Victims include the unskilled, those who are marginalised, ethnic minorities, indigenous people, refugees, illegal immigrants, illiterate women, and runaway girls. Some 800,000 people are trafficked across international borders each year. One-third of victims trafficked into the United States each year are children – the UN defines a child as being under 18 – and Sr Catherine says her group has noticed that prostitutes are getting younger with the average age now at around 14. This may be because the HIV/AIDS pandemic has driven men to seek virgins.

New Zealand appears in the statistics only in terms of child prostitution. A report examining prosecutions under the Prostitution Reform Act 2003 which prohibits employing anyone under 18, cited a case in Christchurch.

Sr Catherine drew attention to the legitimising language used in the court report saying that prostitution was not legitimate work but rather exploitation and an abuse of human rights.

She was scathing about arguments which promoted the legalisation of prostitution in this country. The health of those working as prostitutes was a smokescreen.

‘The violence that goes on within this [industry] is terribly demeaning to women and terribly dangerous and whether it’s legalised or not, that same violence goes on.’

A common reason for men using brothels which came out in a number of studies, was because they could get the woman to do whatever they wanted, including acts they could not ask their wives to perform.

‘I’m sure it’s not gentle because it would be if he was comfortable with having his wife do it.’

Traffickers entice their victims through job offers, through beauty contests, through modelling contracts.

‘We have a province in Southern Africa – Lesotho – it’s a very poor country and when their girls are 17 and 18, towards the end of their high school years, they’re beginning to get communications from people overseas offering them a good job or offering to provide better education if they will go to X country.

‘We’re reasonably certain that this is the ploy of traffickers to get these young girls who don’t have a lot of money, who really want a better life, to fall victim to trafficking. Our women are working really hard to try to educate the girls that they work with about the dangers of this.’

Sr Catherine says those who work with women who have been trafficked say that the trauma of being trafficked is so severe that it’s almost impossible to reintegrate somebody into society or even to get them out of the situation of sexual exploitation. ‘We certainly want to provide what we can for those who’ve been victims but the best thing is to prevent it.