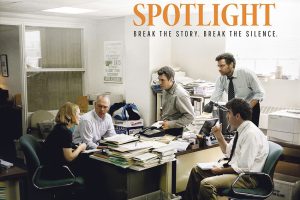 Sexual abuse in the Catholic Church has once again been grabbing the media this year. The film Spotlight has won wide acclaim and an impressive range of awards. It tells the true story of how the Boston Globe newspaper uncovered the extent of sexual abuse by clergy in the Archdiocese of Boston, USA. It also illustrates the totally inadequate leadership in the Church in Boston, which appeared to be more focused on protecting its reputation than protecting its children. The film does not sensationalise but it shows how damaging childhood abuse can be. It is a film that anyone in leadership in the Church or any organisation working with children and vulnerable people should see.

Cardinal Pell gave evidence to the Australian Royal Commission on Sexual Abuse at the end of February. Ill health prevented his return to Australia and he gave evidence from Rome by video link from a room packed with the world media and a group of survivors from Australia. Talking about his years as a priest in the Diocese of Ballarat he described a situation very similar to that in Boston. In his own words, ‘the Church has made enormous mistakes and is working to remedy these, but the Church in many places, certainly in Australia, has mucked things up – let people down. I’m not here to defend the indefensible,’ he said.

Pope Francis has demanded an honesty about the failures of the Church and a determination to remedy those failures. He has established a Pontifical Commission to advise him on policies and strategies to prevent and respond to abuse. The Commission of 17 people from across the world, of which I am one, made headlines at the last meeting in February when we asked one of our members to take leave of absence. He found it difficult to work within the structures we have established. It was regrettable that we had to take this step but it will not deflect the Commission from its task. We are working to ensure the Church right across the world gives highest priority to ensuring the safety of children and vulnerable people in the Church.

Here in New Zealand the Church maintains its positive encouragement to people who have been abused to report this. The Church is committed to investigate thoroughly all complaints and to seek the truth. At the same time we are introducing a range of steps to prevent abuse – better screening of those applying to seminaries or religious life, safe recruitment procedures for employees and volunteers working with children and vulnerable people. Initiatives like those described on p 13, WelCom February 2016 edition. Training programmes have been developed and are being introduced to ensure the Church is a safe and welcoming place for all.

The media focus on abuse can be very difficult for us as members of the Church. However, it can also be an opportunity to renew our commitment to safeguarding our children. Central to our faith is that we are all made in the image and likeness of God and from that all individuals have a unique and an equal value. Honestly recognising past failures helps us to be focused on that truth in what we do now and in the future.

Bill Kilgallon is the National Director of the National Office for Professional Standards for the Catholic Church in Aotearoa New Zealand.