WelCom April 2018: In January this year several Sisters of Our Lady of the Missions celebrated their jubilees of dedicated rndm service.

Barbara Henley celebrated her 50-year jubilee on Sunday 7 January, the Feast of the Epiphany, with parishioners of Waikanae, several family members who had travelled from across the world and religious sisters. Mass was followed by celebrations over lunch and stories. The theme of colour about Barbara’s life was echoed on her rainbow-decorated jubilee cake. 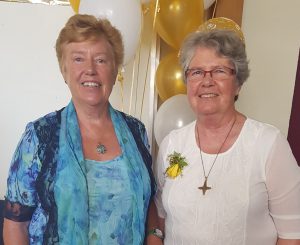 In New Plymouth, 200 parishioners, family members and 25 sisters from North Island communities joined for Mass at St Joseph’s Church, on Saturday 13 January, to celebrate Margaret Monaghan’s 50 years of service. Margaret has taught in Catholic schools and served in the education sector. In the local Taranaki community, she is known for her work as a prison chaplain in the now closed New Plymouth prison. Sr Margaret is involved with the Mission Rest Home as Resident Advocate and Chairperson of the Board of Directors as well as with Sacred Heart Girls’ College.

At St Mary’s Church in Greenmeadows, on Sunday 21 January families, friends and parishioners gathered to celebrate the 60th jubilees of Srs Jeanette McRae, Moyra Foster and Frances Wilson at a parish Eucharistic celebration. The celebrant, Fr Peter Head sm, parish priest, spoke of their commitment to religious life as an example of a response to the invitation given by God. Sr Carmel Cole rndm, Province Leader Aotearoa-New Zealand and Samoa, spoke of the life of each sister and their missions. Morning tea was served in the parish hall where the jubilee cake was cut and photos taken. There was great reminiscing among the many visiting sisters.