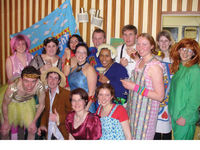 Four years ago the Catholic Tertiary Chaplaincy hosted its first ball, open to all young adults in the Wellington Archdiocese. Why? Initially, because there were a lot of us around and we wanted to see how many we could possibly fit in a room for a good time! Funnily enough, the idea for a ball came not from us young, cool and hip chaplains, but the older, cooler and hipper one called Fr Kevin Connors. Can you believe it! Well, if you’ve met Fr Kev, you would believe it! And this was no ordinary ball either. We thought that the way to celebrate their unique creativity would be for everyone to come dressed up to a theme. Decade-dance was the first theme and my goodness didn’t we have fun that night! Since then, it has become an annual event.

This year, we have a special focus on raising funds to help tertiary students get to World Youth Day 2008 in Sydney, Australia. Pope Benedict has called young people to travel to Sydney to celebrate being young and full of faith. So what better way to raise funds than to start the party here! The international melting pot that the Sydney events will be is reflected in the theme for this year’s ball: ‘Global Village’. Tickets are on sale now from the Chaplaincy at 4 Kelburn Parade or by phone on 472 3325. $35 waged and $30 unwaged. Tickets include light food and drinks (BYO wine and beer).

The picture shows WYD pilgrims at the ball inspired by stories and fairytales, fundraising to travel to Cologne in 2005.