Holy Week opens with a fanfare: HOSANNA! It is a shout of sheer delight, that’s exactly how people reacted when they recognised Jesus of Nazareth entering Jerusalem. There was speculation over whether this increasingly popular wonder-worker and preacher would come to the great festival week of Passover, and now here he was. There was fuel here for a popular uprising and the authorities were very concerned. Something had to be done, and quickly, before the Romans stepped in and punished the whole city.

The week now unfolds as a political and religious drama that could have only one outcome: Jesus of Nazareth had to be discredited and, if necessary, killed. As the High Priest would prophetically declare: Better for one man to die, than for the whole nation to suffer.

Christians know the drama well, including the unexpected conclusion that denies death the last word. But perhaps we know it too well, with the danger that we miss its impact and fail to grasp its life-changing message.

“Enter this time with your heart open to God’s redeeming love in Jesus.”

Enter this time with your heart open to God’s redeeming love in Jesus. Hear the Word with fresh ears and let it deepen your understanding of this week. From the procession with palms and your presence in the ‘Hosanna Crowd’, find your position in the gathering outside Pilate’s palace, and then on the road to Calvary. Are you a curious bystander as the climax nears, or are you offering support to those grieving? Afterwards, what do you do? And what’s your reaction when you hear news of an empty tomb?

These questions help focus on the drama, observing its details, catching is flavours of joy and sadness, fear and terror, wonder and awe. They will propel you to a quiet but resolute appreciation of the story ever old and ever new, one that transformed society of long ago and can do the same again…

Devotion of the Stations of the Cross 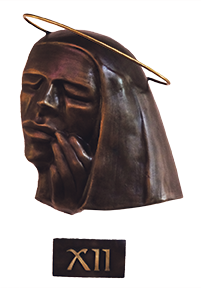 ‘Sorrowing Mother’ one of 14 bronze mouldings of Mary’s emotion as she follows Jesus to Calvery, Sacred Heart Cathedral, Wellington.

God so loved the world that he sent his only Son, the Gospel of John tells us, and the obedience of this Son gave the world its Saviour. His obedience brought him through death to a fullness of life in resurrection and it is from this that true joy and gladness were born.

Lent is the season when Christians reflect on this marvellous mystery through a devotion known as the Stations of the Cross. It is among the earliest devotions recognised by the Church.

The devotion has evolved over the centuries to its present format of 14 ‘Stations’, or stopping places, that depict the final journey of Jesus from his condemnation by Pontius Pilate to his crucifixion and burial.

An apparent impossibility can undergo remarkable transformation when you step into the ‘Stations’ and let them impact on your feelings and on your faith. You can quickly realise the power of love to bring hope to the arena of pain, deep peace to a broken heart.

Joy and gladness are gifts from sacrifice. They are offered from one whose love has been totally for others. They become real and lasting when we understand the love that has given them birth. Making them active in our own lives is the way we give thanks.

They are held in loving memory especially through the Stations of the Cross.

From a reflection by Fr James Lyons in WelCom February 2016.

5th Station: Jesus is helped by Simon the Cyrene to carry his cross.

10th Station: Jesus is stripped of his garments.

11th Station: Jesus is nailed to the cross.

13th Station: The body of Jesus is taken down from the cross.

14th Station: Jesus is laid in the tomb.