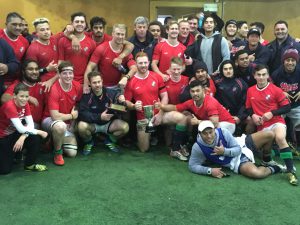 The Marist family worldwide celebrates 200 years this year since its foundation with the signing in 1816 of the Fourvière pledge in Lyon, France. The Marist legacy lives on through community connections in many ways. Marist St Pats Rugby Football Club has built a proud tradition in the 44 years since it was established out of the merger of Marist and St Pats Old Boys in 1971. Recent club chair John Holden explains.

Cardinal John Dew is the Patron of Wellington’s Marist St Pats Rugby Club. And the club’s Catholic heritage is further built upon with the presence of club chaplain, Fr Barry Scannell, parish priest of St Mary of the Angels, inner city parish, Wellington.

Fr Barry combines his pastoral responsibilities with his chaplaincy for this popular Wellington rugby club. ‘I support the players, administrators and supporters of Marist St Pat’s, a club which has such a long and rich tradition’, he says. As a past player for MSP, Fr Barry has reconnected with many old faces since taking over the chaplaincy in 2014.

Marist St Pats is synonymous with Wellington club rugby and its core values and a strong sense of community keeps the club thriving at all levels. Since its inception in 1971 the club has won 14 Premier grade Jubilee Cups – the top prize in Wellington club rugby – and featured in 18 finals since the current finals’ system was introduced in 1993. It continued this tradition in reaching the 2016 Jubilee Cup final, a thrilling match that resulted in a hard fought loss 20–24 to the Tawa RFC in August.

Club president, John Wootton, also says the club works hard to maintain the Catholic character. ‘There is a good culture and obviously it’s one that we hope to sustain,’ he says. ‘The Catholic connection is strong and we try to keep that alive.’

The club still has an annual Mass for its players, members and supporters and maintains strong links with Marist schools such as St Patrick’s Colleges in Kilbirnie and Silverstream.