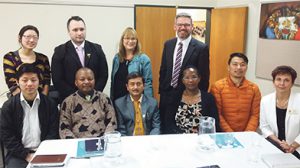 Former refugees now living in Palmerston North brought to life the Social Justice Week theme We all have a migration story at a seminar at the Diocesan Centre on 10 September.

A panel of speakers convened by the Red Cross explained some of the issues facing new arrivals in New Zealand.

Indra Dulal was forced to leave his home country of Bhutan in his early 20s. He spent 12 years as a volunteer teacher in a Caritas programme in a Nepalese refugee camp. Being resettled in New Zealand was difficult at first.

‘I was an English teacher but when I came to New Zealand, I was completely lost. I couldn’t understand anyone and no one could understand me.’ Mr Dulal is now Palmerston North’s first Justice of the Peace from a refugee background.

Poe Zaw from Myanmar gave some hints for communicating with second-language English speakers. ‘Use short words; try not to repeat yourself; try not to use jargon or slang; be patient.’ He said he was sure that second-language learners are better problem solvers. ‘We don’t easily give up!’

Caritas researcher Cathy Bi told the audience of around 60 people that welcoming refugees and migrants is a central part of our faith.

‘The fear of the “other” can be used by politicians to legitimise policy that does not reflect human dignity.’ She said overcoming fear begins with understanding, empathy and a willingness to encounter. ‘We are motivated by mercy, not fear.’

A panel of politicians responded to the experiences shared by the former refugees. Green Party immigration spokesperson Denise Roche said New Zealand has a duty of compassion towards refugees. ‘To offer ourselves as a haven for refugees is a moral obligation.’

The seminar was organised and hosted by the Palmerston North Diocese Commission for Justice, Peace and Development.