Members of Te Runanga o Te Hahi Katorika Ki Aotearoa will have on their agenda a replacement for  Bishop Max Takuira Mariu SM when they meet next month. 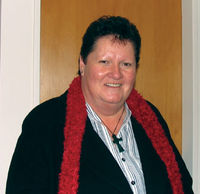 Te Kahui o te Ariki member, Tui Cadigan RSM, who represents Māori women religious on Te Runanga, said it was important for the first peoples of this nation to have a voice at the bishops’ table.

‘When we lost our bishop it was a huge blow. Even though he tried, it was not possible to get around the country as the people may have wished. It is hard to encourage Māori to go where they are ignored. The other bishops will hopefully be prepared to bend over backwards to support Māori in their desire for a bishop of Māori descent.’

‘We need to have a Māori sitting at that table to signal recognition of the Treaty relationship and the Catholic Church. If Takuira’s appointment was just a token gesture, that’s not good for Māori. My understanding was that it was more than that.

‘Te Runanga needs to have dialogue with our people—needs to get the best information about the process out to our people. Māori have expectations—with Takuira—a hikoi to Rome was part of a wider discussion between Māori and the church. What do the people want to do to draw Rome’s attention to our needs and hopes?’ What are the limitations given church law and process?’

The Bishops’Conference deputy for Te Runanga o te Hahi Katorika, Bishop Barry Jones, said Te Runanga, at its meeting at Holy Cross Conference Centre earlier this year, expressed its view that the appointment of another bishop who was Māori would give clear expression that Māori take their place in the church as Māori.

It would also strengthen the note of ‘catholicity’ and help the work of catechesis among Māori Catholics, he said. The bishops have been made fully aware of these points, but emphasise that no one can make predictions about the appointments of bishops.

‘The conference accepts the point of view of Te Runanga but also wants it to address areas of Catholic life that it can do something about, such as the promotion of vocations to the priesthood and religious life, ongoing formation in faith, and the development of leadership among Catholic Māori,’ Bishop Barry said.

In 1990 Te Runanga developed a Māori Pastoral Care Plan which the bishops’ conference ratified in principle subject to some changes which included more reference to Catholic social teaching.

Te Runanga wanted to develop resources—new waiata—the one hymn might have five different tunes which makes it hard when Māori come together. Sr Tui says Pa Mikaere Ryan and Pa Henare Tate in Auckland have been looking at Māori prayers ‘not so much translating but looking to achieve the imagery which speaks most clearly to Māori of what is being said in the Eucharistic Prayer’.

But resources are scarce. Te Runanga’s budget has been cut at times—what we now get is largely eaten up in bringing members from all over the country to two national meetings a year. Te Runanga has to operate across iwi and across rohe which is very significant in the Māori world.

Sr Tui said it was a tough challenge to get Māori involved in what’s going on both in terms of persuading Māori to stay with an institution that tends to ignore them and in getting the institution to work with Māori on their own terms.

In more recent generations there has been much more education around the history of Māori. Many Pakeha became educated and quite shocked by this reality. But people are starting to wonder what has changed.

‘They’re either jumping off the waka or they’re jumping up and down in the waka—either way it’s bumpy.’

She cites as an example of how Māori struggle to be involved in the church a meeting with Te Kahu o te Rangi which focused at one stage on young Māori and their place in the church.

‘A woman there was nominated for the fundraising committee for World Youth Day. This woman said she felt she was past fundraising but she had three daughters one of whom was a professional fundraiser and she would like to volunteer with her two sisters.

‘The response was, “oh we’re only wanting one Māori”.

‘For goodness sake we’re not asking you for anything. This is gift. This woman does this for a living. She knows how to raise funds. She’s not asking, “can the three of us go to Sydney”. But she’s bringing those two back into relationship, into active participation in the church.’

Sr Tui said ‘What was most distressing for me was that here were three young people volunteering their time and energy and they were keen to be involved and their offer was rejected.’

The director of Archdiocesan Pastoral Services, Lorraine McArthur, says the committee was not specifically a fundraising committee. It was to organise all the World Youth Day activities throughout the archdiocese. So it was not a matter of rejecting the offer but more of trying to keep the committee to a workable number of people with the many different youth communities being represented on it.

Members have the capacity to involve others in their projects so the two sisters could have come in on the committee’s activities without actually needing to be on the committee.