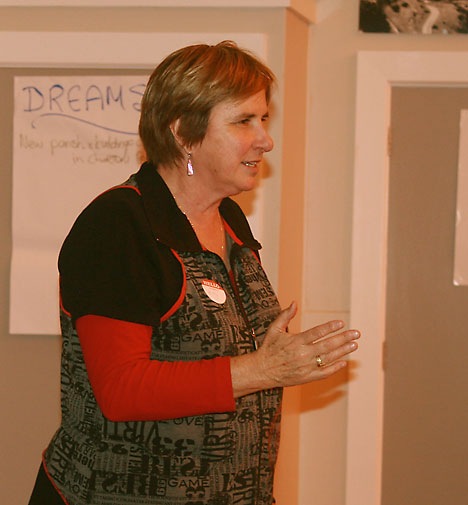 The presence of Christ in a welcoming community was one absolute in a sea of questions at a meeting of parishioners from Johnsonville, Khandallah and Newlands last month.

The meeting in Khandallah Town Hall on 19 June drew around 55 people keen to discuss how to live their faith and how their community could better meet pastoral needs.

The gathering was one of many throughout the archdiocese in response to Archbishop John Dew’s call for responses to his proposals to halve the number of parishes.

In the document A Future Full of Hope, Archbishop John wrote of the challenges facing the archdiocese including providing Sunday Eucharist and sacramental ministers in all communities, fostering a new and revised understanding of liturgy, chaplaincy support for the 47 schools, maintaining and insuring buildings, ensuring that inculturation processes are in place for new migrants and providing services that recognise the growing ethnic diversity of the archdiocese as well as the geographic distance from Mass centres of some, particularly rural, isolated communities.

Parishes are asked to write their responses to the archbishop by the end of August and he will announce a decision in the following two months.

As with other parish meetings in the archdiocese, the northern parishes believe the impetus for the proposal is the aging and dwindling number of priests to serve the parishes.

‘Is having Christ present facilitated through priesthood or are there other ways?’ one group asked.

Was this call an opportunity to explore ways in which lay people could fulfil a variety of roles now performed by priests, thus freeing the priests to carry out the pastoral duties for which they were ordained?

If the focus is on the shortage of priests, the proposed amalgamation of parishes may have to be done again in five years time, some said. Meanwhile, parish communities might fracture and the strength parishioners draw from the parish’s identity may again be lost.

However, if the community explored the possibilities of a strong lay leadership, enabling the priests to do the key tasks only priests can do [consecrate communion hosts and wine, baptise and anoint the sick except in emergencies and marry – sacramental preparation is often done by a lay pastoral leader working with the school where appropriate], this may result in a much more sustainable and collaborative community.

Alternatively, a view expressed often and consistently throughout the meeting was if the shortage of priests is the issue then maybe the Church should be looking at other models of priesthood including married clergy and women clergy.

As well as weakening parish identity, many saw amalgamation as creating headaches in terms of transporting the more dependent members of the community to a Mass centre further away.

Some wondered about the schools and whether there was a diocesan strategy to meet a demand for education at particular levels in the various areas.

Providing for the community was uppermost in many people’s minds as well as being able to reach out and bring people in, recognise and encourage talents and a willing involvement in parish activities.

In terms of the earthquake preparedness of church buildings, some wondered whether those parishes whose buildings were closer to the building code, should be contributing to a fund for those parishes less well-resourced facing hefty insurance and renovation bills.

Is this a time of crisis? One group asked, then answered in the affirmative. But they agreed it was an issue of mission – ‘not just our mission, it’s God’s mission as well’.

At the end of the night, chairperson Paul Alsford from Johnsonville suggested there would be many opportunities to continue the discussion and build on the momentum started that night.

Johnsonville was the first of the three parishes to be founded from Ss Peter and Paul Parish Lower Hutt. Around 45,000 people live in the area with Churton Park the fastest growing suburb.

Throughout the archdiocese, some 16,000 people attend Mass on any given Sunday with Mass counts of 655 in Johnsonville, 239 in Newlands and 298 in Khandallah.

Six parishes currently have lay pastoral leaders and the Launch Out lay leadership formation programme has 16 graduates and 13 currently in formation.

Another recent meeting examined the future of parishes in the Hutt Valley.