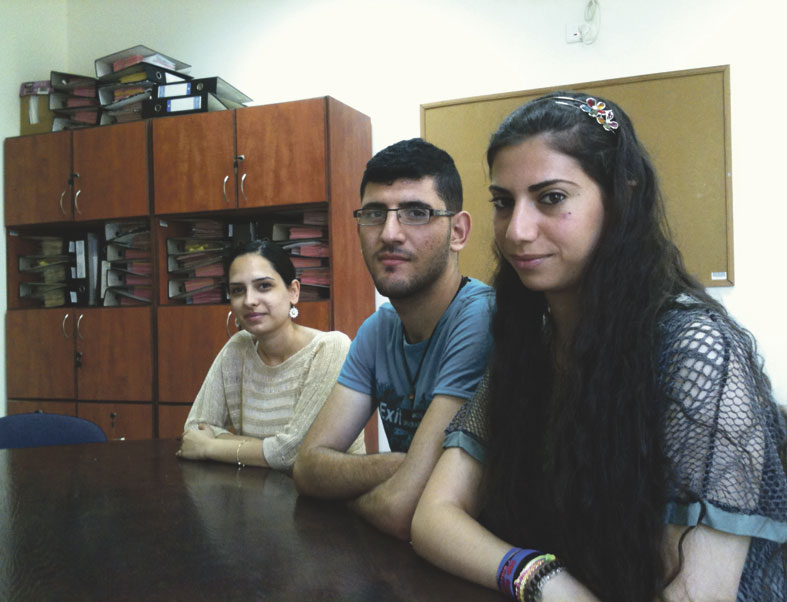 Amid the trials of negotiating the Israeli security system there is great joy and pride in the staff and students at Bethlehem University.

Manar Shomaly who has just graduated with a Masters in International Cooperation and Development says Bethlehem University is well-known in the West Bank for the quality of its graduates. It has very strong masters programmes.

Issa Rashmawi intends to move to another university, possibly overseas  where he will study English literature or tourism and Tamara Alqassis is in her third year of a degree in English literature. Both are confident of gaining places for post-graduate study in other universities on the strength of Bethlehem University’s reputation.

All are keen to tell the world about what is happening in Palestine. As Manar says, all the major news services are influenced by Israeli organisations so there is little known about the way Palestinian land has been acquired and its inhabitants treated over the almost 70 years of Israeli occupation.

They say the future of the country will always be in question but they will come back and help rebuild the Palestinian nation. Tamara says she is optimistic Palestine will one day be free but Manar says ‘Israel comes up with new ideas every day’.

She has heard a number of people say Israel will vanish because no occupation lasts forever ‘but when, you don’t know’.

For Mohammad Al Qaisy, another BU graduate, education is very important for Palestinians. ‘Unemployment is a serious problem. If you don’t have a university degree you can’t easily find a job. As refugees, education is all we have.’

He works with organisations to improve access for people with disabilities. His organisation, Qader, also trains people to assess the disability access of buildings. He says Bethlehem University has a training course for people to understand the needs of people with disabilities. For the first time next semester, the university will enrol a group of students from Efata, a school in Bethlehem also set up by the Vatican, who are unable to speak or hear.

‘We are always discussing how to find ways to help these students.’

Meanwhile the university is developing plans to convert a former hospital nearby to a teaching hotel and restaurant where its hotel management students can hone their skills and where people already working can get further training.

Sydney-based New Zealander Chris Faisandier has been working on strategic planning. He is excited about the prospects but wary of making a mistake. ‘The issue is how easy it is in Palestine to get the supply-demand thing wrong.’

The university is particularly vulnerable each year because it needs to find at least half the costs for each of its 3,000 students from donations.

As well as being a visionary move to buy the Mt David site, which encompasses Handal House, the second most historic house in Palestine, the site is ideal for its size and location.

The teaching restaurant – four-star with five-star service – would be a cultural centre and focus on indigenous cuisine.

‘What we really started doing well before this came out was look at the connect between teaching, research and service.’

‘There’s no point in teaching graduates if they don’t work. I’ve met graduates who are happy to have the work they’ve got who are doing nothing for which they’ve been trained. It’s just depressing.

‘In the wider Palestinian economy there’s nothing – no manufacture, no fisheries, there’s very little research, no water management and related things because Israel’s got the lot. The economic hegemony this occupation has brought about is worse than the military presence.’