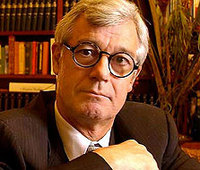 The Age reports that Mr Burnside has accused Mr Andrews of betraying his religious principles in the service of a ‘government of liars and hypocrites’.

Mr Burnside, who is also president of Liberty Victoria, said Mr Andrews had used innocent people as a deterrent policy when he made it clear the reason for sending the 82 Sri Lankans to the remote Pacific island of Nauru was to send a signal to people smugglers.

‘Mistreating innocent people in order to influence the conduct of others is morally beyond redemption,’ Mr Burnside said in an article posted on the website of community group, Australians All, which was co-founded by former prime minister Malcolm Fraser.

He said that if the Sri Lankans were found to be refugees, which looked likely, they would not be offered protection by Australia.

‘Instead we will hawk them around the world to see if another country will take them. The effrontery of this is awesome… if history and common sense are any guide the world community will tell us to look after them ourselves.’

Mr Burnside said Mr Andrews was a devout Christian who had ignored the parable of the Good Samaritan.

‘He will need a powerful anaesthetic to dull the moral pain of what he has done,’ he said.

A spokeswoman for Mr Andrews said that although the government did not provide legal assistance to the asylum seekers, it did facilitate legal access.

She said Mr Burnside’s claims that the federal government initially intended to return the men to Sri Lanka were false.