The leader of a grief counselling programme in the high-medium unit of Rimutaka Prison says the men she works with are struggling day-to-day because they have no one in whom they can safely confide. 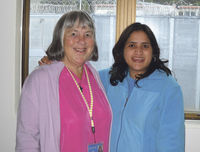 Esther Saldanha is leading her second session of Seasons for Growth in the prison which helps people to grieve through a series of eight meetings.

She works with men who may have been in for up to 12 years for serious crimes. They are considered a medium-to-high risk to their own safety or to that of others.

Ms Saldanha goes to the prison with another volunteer, Mary Boyle, and says the men the pair work with are very trusting.

‘I suppose they see us as non-threatening. Right from the beginning we laid down the rules of trust, of confidentiality and acceptance.’ The men value these principles and this means they are ‘more open to us’. This may be because the women show a high degree of empathy particularly when they hear something that makes the men sad.
‘As opposed to the macho world out there where they have to put on a brave front, if they want to be weak on the programme, they can be.’

The women choose to believe whatever the men tell them. ‘Our job is not to condemn them but to help them through grief.’

The programme has had a number of successes including that of one man who was very angry in the beginning, wanting to attack everyone.

‘We saw a complete turnaround, like a lion becoming a lamb.’

The guys are very loyal and respectful of each other – they listen to and encourage each other.

‘They will never run down another guy in prison.’

Sometimes we may have to be firm with them when they test the boundaries but they can take it from me because they don’t have to prove themselves strong.’

Ms Saldanha says the men are open to the training. They’ve learned not to expect too much.

‘Initially they might come because it’s less lock-up time and they get to see others. But once they realise what it’s about and that it’s somewhere where they can speak about their feelings, then they change.’

She says the deepest need she sees is for volunteers to go into the prison and engage with the guys and listen to them.

But in the context of Seasons for Growth, if you tell them they are free to participate fully in the programme, they’re more willing to enter into it.

For more information about Seasons for Growth contact Esther Saldanha, 04 4961182 or e.saldanha@wn.catholic.org.nz