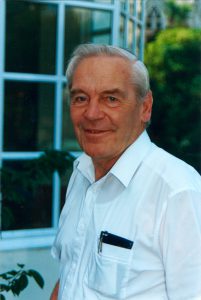 Emeritus Bishop Len Boyle of Dunedin died peacefully on 1 June, surrounded by family and his brother priests, after a short period of ill health. He was 85.

Bishop Boyle, who lived in Mosgiel, had recently moved into the Sacred Heart Home of the Little Sisters of the Poor, Brockville, Dunedin.

Bishop Patrick Dunn, President of the New Zealand Catholic Bishops Conference, said, ‘With sadness we pay tribute to our brother bishop, recalling his commitment to the people he served and his ministry as a priest and bishop. He was a proud son of the Southland community. Community was very important to him and his approach to priesthood over more than 50 years. In retirement he continued to serve as parish priest throughout the Diocese wherever he was needed. We extend our condolences to his family, his brother priests and the community that he loved dearly.’

A Requiem Mass – held at Dunedin’s St Joseph’s Cathedral on Wednesday 8 June – was packed with the Catholic community and featured Catholic bishops from around New Zealand. Deputy Prime Minister Bill English, the former Clutha-Southland MP, was also in attendance.

Bishop Boyle was farewelled from St Mary’s Basilica in Invercargill on Thursday 9 June. He was laid to rest at the small, historic Wrey’s Bush cemetery close to his parents, one-time Nightcaps hoteliers Frank and Catherine Boyle. His wish to return home was indicative of both his love for his family and his loyalty to his roots in Central Southland.

Bishop Boyle was the subject of a biography in 2012, The Good Shepherd, written by former Otago Daily Times journalist, Claire Ramsay. He was born in Nightcaps, Southland, and educated at Sister of Mercy convent schools at Wreys Bush, Nightcaps and Winton and secondary school at St Kevin’s College in Oamaru. He came from a distinguished Winton family who were well known for their involvement with racing, rugby and the hotel trade. He himself had a love of horses. He often said ‘I’m away to a course’ and on return would say, ‘I failed and have to repeat the course’.

A natural storyteller, Bishop Boyle had enjoyed being able to relate anecdotes and memories. As well as being a farmer, shearer and freezing worker, he was a successful athlete and a keen rugby player for Central Southland before joining the priesthood. He trained as a priest at Holy Name Seminary in Christchurch and Holy Cross College in Mosgiel during the 1950s and early 1960s and was ordained as a priest in his hometown of Winton on 31 June 1961. He served in South Dunedin 1961–1964; curate, Georgetown, Invercargill 1964–1970; parish priest, South Dunedin 1970–1972; and parish priest, St Mary’s, Invercargill 1972–1983. While there, he learned of his proposed appointment as co-adjutor bishop, with Bishop John Kavanagh of Dunedin.

He was ordained a bishop in Dunedin’s Town Hall in 1983 and installed as a bishop at St Joseph’s Cathedral in Dunedin. Two years later, on the death of Bishop Kavanagh, he was installed as the 5th Bishop of Dunedin Diocese. Bishop Boyle was the first ‘local’ appointed to head the diocese – he didn’t train in Rome as his predecessors had – and brought great energy and outreach to the role.

He served as a bishop until his retirement in 2004 at age 74. Bishop Boyle had five brothers, Jack, Eddie, Frank, Vincent, Cliff, and two sisters Patricia and Margaret (who died in infancy). He is survived by his brother, Cliff, sister-in-law Eileen Boyle and his 27 nieces and nephews and their families.

In the last line of the biography, The Good Shepherd, Claire Ramsay summed up Bishop Len as ‘an ordinary fella who inspired all of those whose lives he touched in his humble and genuine way’.