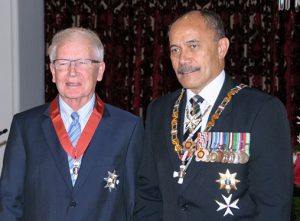 After 22 years at the helm of the New Zealand Catholic Education Office retiring CEO Br Sir Pat Lynch KNZM says it’s time to pass the ball to someone else. He says it has been a privileged journey to have worked with the education sector over 22 years and to have met so many in various roles who make the system work.

‘I got involved with the integration process 40 years ago in 1976, a few months after the Private Schools Conditional Integration (PSCI) Act had been passed, he said. ‘In the 40 years since the passage of this legislation, Integrated schools have successfully taken their place in the state school system and are now strongly contributing to the welfare of the system itself and to the wellbeing of New Zealand society.’

On 9 October 1975 the PSCI Act was passed by Parliament on the last sitting day of the Third Labour Government with the support of the National Party Opposition. In so doing, in the words of the late Norman Kirk, the Prime Minister who initially led the Third Labour Government, it ‘healed the one hundred year education running sore’ whereby a significant sector of New Zealand schools had been denied state funding.

Br Pat said, ‘We’ve come from a place in 1976 where we had a ‘Cinderella’ view of ourselves with rundown schools, lack of facilities, money and staff. Integration has allowed all that to change. I thought it would take a generation to come right and it has.

‘Essentially what’s happened in my 22 years with NZCEO, is everybody has an equal place within our schools. We’re respected in the market place, within education organisations and the community in general and there’s plenty of evidence of that. Today you can go into any Catholic school and it’s equal with the state system.

‘Our schools are truly integrated. More teachers are now doing Theology and RE courses than ever before and at the end of the day we have faith-filled kids graduating from our schools. Many parishes on a Sunday are full of young people with good social consciences.’

Looking ahead Br Pat sees challenges around taking Pope Francis’ messages and implementing them in New Zealand and using our schools to connect with the wider community through behaviour, faith processes and looking after people, as well as having robust professional development for our teachers.

He says the great taonga of the Catholic Church is what we do in our Catholic Schools.

‘As I leave the CEO role of the NZCEO/APIS Office, I am acutely aware it is the proprietors, boards of trustees, principals, teachers, parents and a host of others who have made and continue to make the system work. I am grateful for their generosity, support and goodwill, for without them we would not enjoy the success we do.

‘It would be remiss of me not to single out successive New Zealand Governments since 1976 that have made the system work, in collaboration with Proprietors through their Integration Agreements with the Crown. Each of the 15 Ministers of Education who have administered the Integration Act have acted with integrity and goodwill towards the sector – for this we can be eternally grateful. And I’ve been blessed to have had a team who work so hard in our small office to help look after this country’s Integrated schools.

‘May the trust and goodwill the sector has built up in all of its wonderful diversity, continue to strengthen and deliver special character education to the over 88,000 young people in our 324 Integrated schools throughout the land.

‘I commend Paul Ferris, the new CEO, to you as a man whom you can trust. He is a well-respected educator who has your interests at heart.’

Br Pat is returning Auckland to live in the Brothers’ community and has a number of invitations to government roles with boards and trusteeships both here and in Australia.