WelCom March 2018: New Zealand cannot separate out its poorest people and pretend they don’t matter, The Salvation Army says in its annual State of the Nation Report, released on 14 February 2018.

For 10 years the Salvation Army has offered State of the Nation reports to track social and economic trends that affect our country.

This year’s report, called Kei a Tātou – It Is Us, shows that for many New Zealanders incomes have not improved, welfare needs have increased and rents are rising faster than incomes despite more jobs being created and GDP rising.

Between 2013 and 2017, the New Zealand economy grew by 14 per cent, the number of jobs grew 15 per cent and per-capita GDP grew 13 per cent in inflation-adjusted terms. 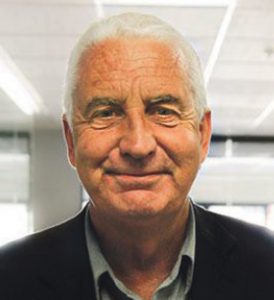 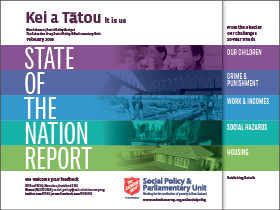 Report author, Salvation Army social policy analyst Alan Johnson, says everyone isn’t sharing the strong economic growth and that there has been frightening rise in the number of families falling into food poverty.

Johnson said it was clear strong economic growth had not been shared around. ‘New Zealand cannot separate out its poorest people and pretend they don’t matter. New Zealand is us – all of us who see ourselves as Kiwi. So, when some of us miss out, the responsibility for correcting it belong to us all.’

That’s the true cost of rent rises and slow wage growth on our most vulnerable families, Mr Johnson says.

The report monitors New Zealand’s social progress in 25 areas and provides an analysis of how the country has progressed in bringing social and economic equity to citizens over the past decade.

It shows extra buoyancy in the economy has not led substantial change in child poverty rates, or a reduction in the number of young people without meaningful work – youth unemployment remained around 20 per cent. The community cost in dealing with the epidemic growth in methamphetamine has increased, with an 80 per cent growth in methamphetamine-related offences in the past three years. While, ‘poor public-policy decisions by governments’ has seen the prison population surge to record levels, despite a consistent drop in crime.

The Salvation Army has compiled a list of what it considers the ten most important social trends of the past ten years, ‘to help inform a new conversation we should have as New Zealanders around the social progress we value and, from this, the society we would like to create.’

Jobs – credible job growth in the past five years.

Teenage Pregnancies – teenage pregnancy rates more than have over the past eight years.

Graeme Munford, Director of Manawatu-based combined Catholic, Anglican and Community Support service agency, ACROSS Te Kotahitanga O Te Wairua, says he welcomes The Salvation Army report and agrees with many of its findings.

‘From where we stand it looks like many of the social issues impacting on individuals and families, particularly home affordability and the so-called housing crisis, weren’t seen coming. The report’s comment, it is clear that the benefits of this recent strong economic growth have not been shared across the board, or trickled down, is largely true, he says.

‘We still live in a pretty competitive society and while the key theme of Kei a Tatou – It is Us has a hopeful ring to it, social progress, as the report terms it, still largely rests on the sorts of programmes and support agencies like ACROSS can offer people. Our experience, for example, of providing support to those bereaved by suicide tells us that no one tragic event necessarily has a single cause.

‘Our responsibility is to care for others in situations where there are not always answers, explanations or solutions to problems. Our hope is that successive governments and policy makers will have that vision: that individuals are not on their own responsible for social problems – adequate funding of community organisations such as ACROSS then is critical, and their success should not be reduced to simply reporting outcomes in terms of statistics, but instead, of changed lives.

‘And, the future of our nation, as the report alludes to, depends in a part on how we treat our young people; youth unemployment is significant concern from our perspective. We need to continue to provide meaningful support to young people who, for whatever reason, are not engaged in education or work if we are to ensure that they do not become represented in the other statistics identified in the report,’ Mr Munford said.