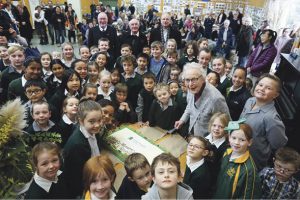 Past and present pupils and families gathered to celebrate the 60th anniversary for St James’ Catholic School in Palmerston North on the weekend of 26-27 May 2018.

Principal Teresa Edwards, said past pupils visited the city for the occasion, and many former families popped in to see the school and photo displays in the school hall.

There were two special guests of honour: Sister Joan Manson (89) who was one of St James’ first teachers; and Mr Barry Slade, the school’s first lay principal.

Barry and Sr Joan spent time with students during the week prior to the celebrations to share what school days were like in their time.They sent students on a scavenger hunt through old photos and documents. 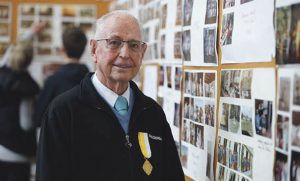 The weekend celebrations started with a barn dance, and concluded the next day with a Mass at the Cathedral of the Holy Spirit followed by morning tea and a school tour.

Bronwyn Bateman, a school parent, prepared a timeline gift for the anniversary celebrations as a beautiful reminder of past milestones and celebrations. The timeline is now positioned in the school hall.