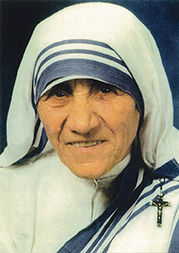 Mother Teresa of Kolkata was canonised a Saint of the Catholic Church on 4 September 2016. The historic event was witnessed by over 100,000 people of all faiths at St Peter’s Square in Vatican City, and live-streamed around the world.

St Teresa aided the sick and dying in the slums of India and in the poorest neighbourhoods around the world. Pope Francis described her work as an ‘eloquent witness to God’s closeness to the poorest of the poor’.

In his homily, the pope praised Mother Teresa as the merciful saint who defended the lives of the unborn, sick, and abandoned and who shamed world leaders for the ‘crimes of poverty they themselves created.’

Pope Francis held Mother Teresa up as a model for today’s Christians. He said the saint spent her life ‘bowing down before those who were spent, left to die on the side of the road, seeing in them their God-given dignity.’

In Wellington, on Saturday 10 September, Sacred Heart Cathedral was overflowing with more than 600 people at a thanksgiving Mass for the canonisation of Teresa – among them, the Porirua-based Missionaries of Charity Sisters as well as many parishioners including members of the Archdiocese’s multi-ethnic communities.

The date was 70 years to the day that Teresa, on a train to her teaching job in Darjeeling, heard ‘a call within a call – to do something to take care of the poorest of the poor.’

In his homily, Cardinal John Dew referred to St Paul’s hymn to love. ‘In the first letter to the Corinthians there are three words, “Love is kind” and then four words “Love endures all things”. Kind translates as love is always ready to be of assistance to others.

‘Teresa of Calcutta showed kindness to the poor, the dying, orphans, lepers, AIDs sufferers, the unwanted, the unloved, the uncared for, those shunned by others; her kindness is shown to the world today though her Sisters, the Missionaries of Charity.

‘The world has been inspired by Mother Teresa’s work, her energy and commitment to care for the poor. Today, in honour of St Teresa of Calcutta, we go out and do something beautiful for God.

‘The final word is St Teresa’s … “Go out into the world today and love the people you meet. Let your presence light new light in the hearts of people.” ’