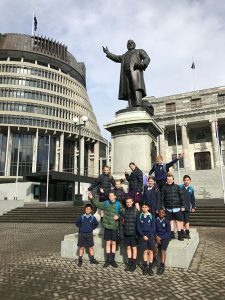 The students had about four weeks to research, plan and create the buildings before returning to Parliament on Monday 18 September to present their work to the other schools involved and representatives from Parliament and Microsoft.

Their brief was to recreate the buildings and interior of the Beehive and Parliament House and be creative in how they did this. St Benedict’s ‘re-design’ areas included the Prime Minister’s Office, the Cabinet Meeting Room, the Debating Chamber and Legislative Council Chamber. They also created ‘extra’ rooms they thought would make Parliament a more interesting and versatile place for people to work and visit. These included the ‘Cake Room’, the ‘Snow Room’ ‒ which worked well until the snowmen escaped and covered the other spaces in snow ‒ and the ‘Petting Zoo’. 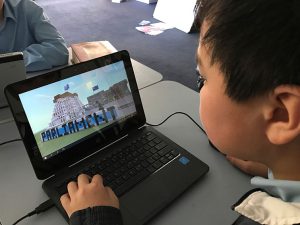 The students had to work collaboratively and learn to negotiate as everyone had their own idea of how the buildings should look and what should be included. They said working together in Minecraft and learning about Parliament at the same time was one of the best things about the project. ‘We were allowed to be totally creative with the buildings and about what rooms we could include, which was fun.’

The students were delighted with the result of their combined efforts and said it was an awesome educational experience.