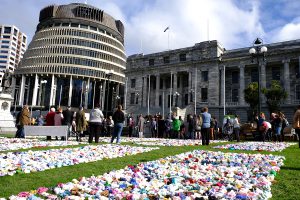 More than 13,000 especially knitted babies’ booties were displayed outside Parliament on Thursday 26 July as a ‘project of love’ and memorial to 13,285 ‘lives lost to abortion last year’.

Pro-life organisers, Voice for Life, invited thousands of people from across the country to take part in knitting the booties for this public statement.

Supporters were at the demonstration. Counter-protesters were also present.

Voice for Life national president Jacqui DeRuiter said, ‘We are here to speak for the unborn, to show Parliament we do not need more-liberal abortion laws. In 2017, 18 per cent of confirmed pregnancies were ended by abortion. For every day last year, 36 pregnant women felt they were not in the position to continue their pregnancy. We want to be part of finding a better way forward for mothers and their babies.’

Ms DeRuiter said her group wanted pregnant women to be properly supported so they could consider all options.

National MPs Simon O’Connor and Chris Penk were among those who addressed the support-for-life group.

Labour and Green Party MPs, as well as Nikki Kaye and Amy Adams from the National Party, spoke to the crowd in support of the counter-protesters. Ms Adams said there was ‘cross-party support for improving abortion law’.