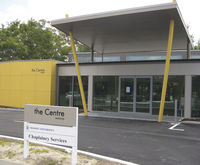 Massey University’s  Palmerston North campus has a new interdenominational chaplaincy centre.
The Centre Waiora is a place for the expression of Christian faith, care and hospitality to students and staff on campus. It will be used for meetings of Christian groups, for their activities and for the hosting of appropriate social and cultural activities.

The Centre Waiora has been some 10 years in the making. The Catholic community contributed financially to the project as did many local churches and individuals.

It was blessed on October 14 by Archdeacon Wiremu Te Awe Awe and formally opened on March 17 by Sir Paul Reeves.

‘There is a whakatauki or traditional saying: “those who lead give sight to those who follow; those behind give life to those who lead.”’ Sir Paul paid tribute to the work of the board led by Morva Croxson who, he said, ‘are to be congratulated and as the patron of the trust, it is a pleasure to be here’.

After explaining that his pass marks were never very good, Sir Paul said he has spent a great deal of time in tertiary institutions as the father of students and as chancellor of a university ‘to the north of here’. He spoke of a consistent thread of idealism among students so that alongside the need to get a job is the ‘vision of a world where promises are kept, bargains are honoured and friendship and intelligence are valued above power and wealth’.

‘The Christian tradition is that we have always been on a journey where we have had to struggle and, in the midst of our uncertainty and diversity, God has been revealed. In fact uncertainty and discovery may be two sides of the one coin.

‘This Christian centre in the midst of a multi-ethnic, multi-faith campus has some important things to offer.

‘At its best, religion is a cable of meaning stretching throughout the length and complexity of life. There is the visible part, the rituals and the real estate.

Sir Paul saw a time when Aotearoa New Zealand may become a country of minorities where no one group could assume the ascendancy and set the rules. Christians would become smaller in number, ‘We may have to distinguish between observant and cultural Christians and the moral and ethical challenges will be increasingly complex’.

Putting statistics aside, Sir Paul said, the essentials of faith were there and he saw a need to offer the practicalities of compassion and redemption. ‘No one need fear the journey God calls them to. The task of the chaplaincy team is to be credible expressions of this tradition and offer it sensitively, intelligently and consistently.’

Sited next to the bus turning bay, The Centre Waiora is in a prime location and has already proven a popular spot for students to drop in, meet, study, have a coffee, pray and reflect.

The interdenominational chaplaincy team is grateful for the support of the Catholic diocese in building this centre for Christianity at Massey.