As the Thai capital faced a dramatic climax to a nine-week standoff between anti-government protesters and troops on Wednesday May 19, the Jesuit community in Bangkok opened its doors to a group of ‘Bangkok refugees’. 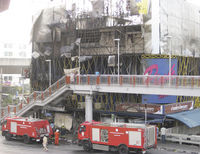 At least three people were killed in the military operation aimed at restoring order after days of armed chaos that resulted in more than 60 deaths ( for background on the Thai political situation leading to the latest standoff, click here).
About 15 men and women sought sanctuary in Xavier Hall on the Tuesday afternoon as the situation at Victory Monument grew more dangerous. 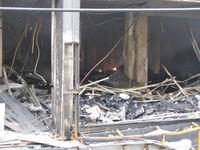 We heard repeated gun shots interspersed with fire crackers and bomb explosions. At 6.30pm as some of us were about to begin Mass, we heard two loud explosions outside. We rushed to the gates and saw people and police retreating from the Din Daeng-Victory Monument intersection. Several shops and  buildings were ablaze.
An eerie silence fell as a curfew was imposed from 8pm to 6am, so different from the past weeks of speeches and applause, sporadic gunfire, blasts and fire crackers. The silence was broken only by frequent single gunshots with occasional blasts. 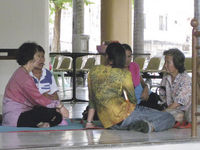 The first group of ‘refugees’ arrived on Tuesday afternoon and the Xavier Hall women collaborators checked their belongings for weapons before allowing them to enter.
One later claimed as she was leaving that she was a leader of one of the protest groups at the monument. She seemed subdued.
The following morning buildings at the monument intersection were burnt and streets strewn with rubbish from the gatherings of the previous nights. Road blocks were in place and there was a visible military and police presence along with fire engines, fire fighters and spectators in cars and on motorbikes.
Vans used for public transport and food vendors provided some signs of ‘normalcy’.
A favourite symbol of mine is the lotus plant which grows in mud water. From the mud water grows a beautiful flower! We have been planted these past days into the ‘mud water’ of the sufferings of the people of Thailand. We share these sufferings. They are ours.
We have been wounded by all kinds of violence these weeks. From these wounds a beautiful flower of peace and compassion grows in all our hearts.