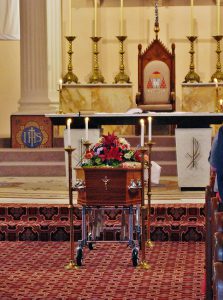 In early March, the body of an elderly man was found in his apartment, two blocks from Wellington’s Metropolitan Cathedral of the Sacred Heart. Police estimated he may have died two months previously. Attempts to find next of kin failed. There was no one to claim the body. He lived and died alone; unknown, unwanted.

This sad situation was discussed at a meeting of the Archdiocesan Pastoral Council as part of a reflection on the Corporal and Spiritual Works of Mercy. Two of the ‘Works’ relate to the deceased: burying the dead and praying for those who have died.

Fr James Lyons, parish priest of Sacred Heart Cathedral asked, ‘What about this man who has been dead for two months and no-one knew him? A suggestion was voiced: We know nothing about this person, whether or not he was religious; we don’t even know his name. If he has no family, no friends, perhaps we could look after him and give him a dignified burial.

That suggestion became a reality. In a letter to his parishioners Fr James said nothing was known of the man – now identified as James (Jim) Grant – except that he was born into a family, lived and died among us. ‘He was identical to us in his humanity and, as Christians, we know he was a living image of God. It seems most fitting we offer him a memorial within the context of our own faith, giving thanks for the gift of life and resolving to do whatever is possible to keep in touch with family, to strengthen friendships and to assist those in any kind of need. May our love commend James Lewis Grant to the all-embracing love of God. May he rest in peace’.

Jim Grant was prayed for and farewelled in the Cathedral at a Requiem Mass, 10.30am, on Sunday 13 March. Hundreds turned out. Fr James, noting similar cases in recent years of elderly men dying unnoticed in Wellington, spoke about on the abnormality of modern loneliness.

‘Whenever something like this happens there is an outcry: we don’t know each other these days, we keep to ourselves. Some people are very, very private and that’s what this man was and hence he’s died the way he has. It may be sad to some people but, it was how he wanted to live life.’

Fr James invited the crowd to talk to each other and they erupted in conversation for several minutes. ‘See how much we enjoy it,’ he said.

Six parishioners from across the parish, were invited to be Jim’s pallbearers. Each took their role seriously and with dignity, bringing the casket through the Doors of Mercy.

Fr James’ goal has been to make the Cathedral a place of welcome, ‘where people are at home with their faith, and even at home without their faith – so that it’s a welcoming place for all. The instance of this burial for Jim Grant will add to the energy this is creating in this environment.’

Bury the Dead: visit a nearby cemetery; tend and tidy neglected gravesites – valued ways of remembering the dead and giving honour to all life. You also ‘bury the dead’ when you ‘bury’ a grudge, put a quarrel behind you, forgive a hurt, make peace.