Tongan residents on the tiny northern island of Niuatoputapu are still waiting for shelter more than two months after the Pacific tsunami on September 30 killed nine people and wiped out their homes in several villages.
The tsunami, the first to hit Tonga and Samoa, was sparked by an earthquake measuring 8.1 on the Richter scale which also sent shocks to Indonesia and Vanuatu.
Parish priest in the Wellington parish of Newlands, Fr Mateo Kivalu, just back after a month on the island visiting his family after his uncle was killed, says many people are still without the temporary shelter that the government promised them with New Zealand help. 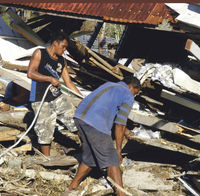 Yet he says there are empty houses in the more elevated village of Ma’atu behind the worst-hit village of Hihifo belonging to people who own them through inheritance but have moved to the main island.
He said that in the first week after the tsunami struck, the New Zealand government aid agency, NZAID, said it was waiting for a Tongan government request for help with housing reconstruction.
But, says Fr Mateo, ‘Why wait? Our people are desperate for help’.
When he arrived on the island a month ago, Fr Mateo found the people depressed and unable to think about how to help themselves.
‘People have been destroyed by the tsunami, morally and spiritually as well as physically and socially. But even when government officials visited the island, they gave few concrete solutions to the people’s plight.
The Tongan government and its partners have left him and isolated Niua people confused and wanting action. 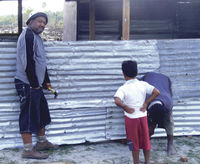 While on Niua, Fr Mateo set to with his family to build a temporary shelter using corrugated iron and timbers salvaged from the storm. The 12 square metre shelter or little house, known in Tongan as fakahekeheke, has an earthen floor and no windows but it does have a door in the entrance and another into a yet-to-be-built kitchen. As yet there is no toilet. ‘This is a serious threat for people’s health.’
Fr Mateo left the donations from New Zealanders for the parish priest so that he could buy petrol to enable the people to cut timber from the bush for their shelters.
For more information, visit the Tongan Advisory Council in Auckland’s website www.tonganz.org

Above right: Maleko ‘Onesi and his son search through debris after the tsunami to salvage materials to build a shelter on Hihifo, the worst-hit village.

Above: Fr Mateo Kivalu, left, on the site of the temporary shelter he built for his family while visiting from Wellington.

Right: the Catholic church on the island of Niuatoputapu, standing solid amid the storm’s detritus.