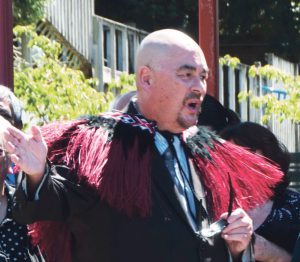 WelCom April 2018: On 15 March 2018, Cardinal John Dew announced the appointment of Deacon Danny Karatea-Goddard as Vicar for Māori for the Archdiocese of Wellington. Danny was appointed as Tūranga Māori in February 2017.

Monsignor Gerard Burns, the former Vicar for Māori will continue in his role as Vicar-General and parish priest of Te Ngākau Tapu in Porirua.

Danny says the Archdiocese, and especially the Māori Catholic communities, are indebted to the very special way Pā Gerard has cared for and led Māori pastoral care for many years. ‘He toa, pononga ia mo tātou katoa.’

‘Pa Gerard will continue his ministry to Māori as parish priest to the personal parish of Te Ngākau Tapu and remain a member of the Māori Vicariate team along with Rangimoeroa and me. I am delighted to have been asked to serve as Vicar for Māori and to continue Pā Gerry’s good work. Pastoral outreach to the peripheries of the Archdiocese will remain our focus as a Vicariate.

‘Abundant blessings to you all in this time of the Risen Christ. Ngā manaakitanga ki a koutou katoa i tēnei wā o te aranga or te Karaiti.’