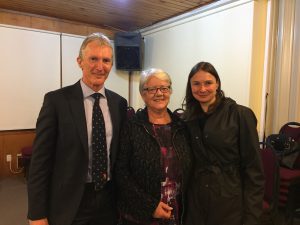 WelCom November 2017: Two Immigration NZ representatives spoke about modern slavery and exploitation, particularly in Aotearoa New Zealand, to about 70 people at the Anglican Annex in Tawa on 25 September this year.

The evening was organised by ANZRATH. They are a group of religious and friends from the Archdiocese of Wellington who work to increase awareness of exploitation and trafficking as a growing reality in our country.

Dr Rebecca Miller and Peter Devoy presented a knowledgeable overview of modern slavery as well as trends in human trafficking and exploitation. They said that globally, trafficking is now the second most significant organised type of crime with an estimated annual ‘income’ of $150 billion. The Asia Pacific region hosts the largest number of trafficked and exploited persons in the world.

Many people travel willingly to New Zealand in search of a better life for their families but people from migrant communities can be deceived by ‘promises’ of residency and will often do anything to work and search for a better life. Such promises of residency, citizenship or jobs usually involve the person being coerced or deceived into paying large sums of money to ‘obtain residency’ or the job turns out to be non-existent, or very low or no wages. This results in serious undermining of the victim’s personal freedom and choices.

Peter Devoy said labour exploitation is growing in New Zealand, particularly in hospitality, agriculture and horticulture industries. Victims fear coming forward and speaking about their concerns will make matters worse. However, there have been some successful prosecutions of offenders; and victims have been supported through this process in practical and compassionate ways as they rebuild their lives.

Common indicators include: coercion to remain in a situation; identity documents taken; excessive working days or hours; little or no pay; inhumane and degrading living and working conditions; threats or experience of psychological or physical violence.

The presenters advised us to contact NZ Police, or Crimestoppers on 0800 555 111 or www.crimestoppers-nz.org about serious concerns about possible victims.

Dr Millar’s and Peter Devoy’s stories revealed their commitment and compassion. Everyone listening was overwhelmed by the numbers of people trafficked and exploited. All felt challenged and encouraged to work for all people’s rights and dignity.

Dr Miller encouraged the audience ‘not to underestimate the power of educating ourselves’ or of consumer power and building awareness. She said several international brands have changed to ethical purchasing because of public demand. For example, Who made your clothes?’ asks about ethically-produced fashion alongside the power of consumers in the fight against people trafficking and exploitation (www.tearfund.org.nz/ethicalfashionguide).

Peter Devoy challenged us to ask ourselves ‘what kind of country do we want to be?’