During a question-and-answer session, a question was asked why the church excludes women from serving as deacons. Pope Francis indicated he would look into clarifying the role of female deacons in the early centuries of the church. 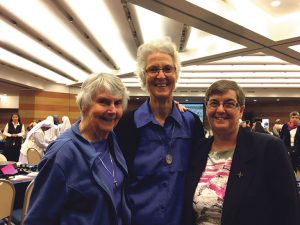 Can you imagine being in a room with approximately 900 sisters from all over the world? The energy is electric! This was my experience and privilege from 9‒13 May 2016 when, along with New Zealanders Sr Margaret Anne Mills DOLC and Sr Josephine Kane RNDM, I took part in the General Assembly of UISG – leaders of women’s religious congregations.

We were together for five days – praying, listening, sharing our faith in Jesus, our commitment to Gospel living; and the stories of our everyday, in many cases, lived in amazingly dangerous situations.

The 2016 Assembly theme, Weaving Global Solidarity for Life, was chosen to encourage us to go beyond the confines of our own communities, congregations and countries so that we could learn to be present together on the peripheries of the world and society. We heard, discussed and responded to three very challenging presentations by sisters from South America, India and the United States. We met sisters who were leaders of specific UISG projects: helping to rebuild life and hope in the South Sudan; working to support refugees in Southern Italy; and many groups working against the trafficking of humans. Talitha Kum is the UISG umbrella group and in New Zealand, our group is ANZRATH – Aotearoa New Zealand Religious Against the Trafficking of Humans.

You can find the Assembly presentations, videos and photos on the UISG website (www.internationalunionsuperiorsgeneral.org/meetings/assembly/).

For me the heart of the Assembly was spending time with individual sisters and hearing about their lives – so many courageous women living simply among their people, witnessing to the love of God! I was moved by stories of sisters from Northern Nigeria, the Congo, Haiti, China, Benin, Palestine, Iraq and many other countries. I was especially touched by the testimonies of younger religious women who, full of idealism and fervour, are beginning their lives as sisters – just as I did many years ago.

God is good – all the time! 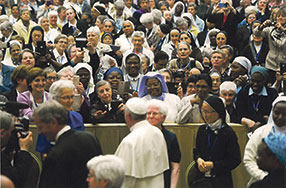 The UISG members met Pope Francis in Rome 12 May 2016. During the meeting Pope Francis responded to a number of questions selected by the UISG executive submitted by members from across the globe. As a result there have been reports in the media about a commission to look at re-establishing the role of women deacons. I considered the more important response from the Pope was that he wants to see an increase of women in decision-making positions in the Church, highlighting that the woman’s perspective is very important. He noted it is essential that women are part of the reflection process and part of the discussion. He mentioned that deacons are another level of clericalism and that he was not sure this was helpful. He emphasised all Catholics should be involved in decision making at parish level and in the Roman dicasteries [church offices in Rome].

Pope Francis noted the vital work of the sisters who care for the poor and marginalised. He also said, ‘Do take a rest! Rest, because so many sicknesses come from a lack of healthy rest’.

Perhaps because I was from the ends of the earth representing Oceania I was among the 30 sisters out of 900 chosen to meet the Pope. I had an opportunity; a small voice inside me was saying, ‘use it well’. I had a name card in a plastic pouch; it was around my neck. It had my name, country and UISG number printed on it. There was the perfect space at the back of the pouch to place Suzanne Aubert’s printed prayer card, her name in bold print. The Pope arrived in front of me; he shook my hand and with my free hand I pointed to New Zealand on my name card, turned the pouch over and pointed to Suzanne’s name. He looked and then there was a second look of recognition. This was special.