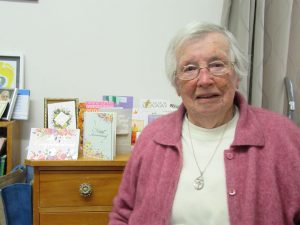 ‘I always followed the Lord’, said Whanganui’s Sr Francesca Bourke rsj when asked what sustained her during 75 years of religious life and the many changes in the church over that time.

Born in the Taranaki town of Kaponga in 1927 to dairy farmers, the young Francesca attended Sacred Heart College in Whanganui for her secondary education, staffed by the Sisters of St Joseph of Nazareth. Seeing the huge statue of the Sacred Heart at the main entrance she sensed God was calling her to religious life.

‘Before I entered the convent at 16, I went back home to look after Dad and three siblings while Mum returned to Ireland to nurse her sick mother,’ said Sr Fran.

After final profession in January 1943 Sr Fran become foundation principal of the newly-established St Anne’s primary school in suburban Whanganui East. Appointments to St Joseph’s in Hastings and St Joseph’s in Fielding followed. Elected as Mother Superior in 1960 it was back to the Mother House in Whanganui and leading the Congregation through all the implications of Vatican II. ‘These weren’t easy years. It was a time of awakening.’

Sr Fran’s leadership team initiated dialogue between the Sisters of St Joseph of Nazareth (known as the ‘Black Joes’) and the Sisters of the Sacred Heart (known as the ‘Brown Joes’) when they were called to return to their founding spirit of Fr Julian Tension Woods and Mary Mackillop. They held their ‘Fusion’ Mass in St Mary’s Catholic Church, Whanganui, in August 2013.