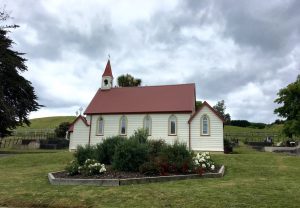 WelCom December 2017: St Joseph’s historic Catholic Church is situated on SH58 between Pauatahanui Village and Judgeford – about 30 minutes’ drive from central Wellington. Once the centre of a small farm district where poverty and isolation were common, it is now just 150 metres away from massive earthworks constructing the new Transmission Gully motorway between Linden and McKay’s Crossing.

As the second Catholic church to be built in the Wellington area, St Joseph’s has a fascinating history. In 1876, four local farmers bought land for the church for £20. The church was constructed at a cost of £200 using Matai and Rimu timber milled locally. The windows are unique in New Zealand, made of transfer pictures on glass – their colours brightly illuminating the names of donor families. Bishop Francis Redwood consecrated the 60-seat church on 28 April 1878.

If today some are finding parish amalgamations a little challenging, spare a thought for the early parishioners of St Joseph’s. Originally under the care of priests from Thorndon, Bishop Redwood put the Pauatahanui, Porirua, and Makara areas into the Hutt parish in 1895. With the capital’s expanding population, the Catholics of Pauatahanui-Plimmerton joined the new Johnsonville parish in 1922. Then in 1940 with further expansion of Porirua, St Joseph’s was absorbed into the newly formed parish of St Theresa’s Plimmerton.

The community has been greatly blessed for 140 years with dedicated priests and lay people, who have given devoted service in growing the faith.

Resilience to the changing times continues, thanks to the generous care of St Theresa’s parishioners. St Joseph’s church is recognised by the Historic Places Trust and is used for weddings, baptisms, funerals and carols at Christmas.

Local early settler Henry Abbott wrote in his diary of 1900, that he drove by horse and trap to Paremata and passed four cars on the way! I wonder what he would think now with the new motorway under construction nearby. In 2020 thousands of cars will sweep past daily, glimpsing the little wooden church nestled on the green hill surrounded by memory filled headstones.