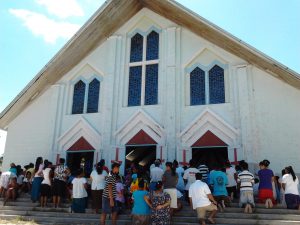 WelCom December 2017: Earlier this year I was invited to give a retreat to the clergy of Kiribati this November. As my departure draws near I have conflicting feelings of excitement and anxiety bubbling up inside me. As I read and talk to people about this far-flung group of atolls I realise what a challenging setting I am being invited to work in.

Kiribati is an island nation in the central Pacific Ocean with a population of about 100,000 people.

The Challenge of Kiribati

First, I sense responsibility. Poor and distant, the group welcomes few overseas speakers or lecturers. Can I leave them richer through what I share? Then there is the getting there and living there. Though the retreat itself is just five days, it requires two days’ travel, with a stopover in Fiji. With just two flights a week to Tarawa I will be there 12 days. Each day’s temperature will range between 25°‒32° – and I am no sun lizard.

To my surprise I also discovered that these 33 scattered atolls – and one coral island – are strongly Catholic, about 55 per cent. The local bishop, Rev Paul Mea, was ordained in 1979, just one year after the region was made a diocese; he has 23 priests, of whom 17 are local, and six MSC (Missionaries of the Sacred Heart) to support him.

These tiny islets are scattered over 3.5 million square kilometres. Those clustered about Tarawa are linked by causeways; on the other hand, it can take a week’s journey in a small boat to reach Christmas Island.

As the average height above the high-tide mark across the islands is just two metres, the slow but remorseless march of rising sea levels, the result of global warming, will be the eventual winner. In 2008 Prime Minister Anote Tong told his people that the islands would be uninhabitable by the end of the century, so they should start planning their departure now and then. The government has already bought large tracts of land on Vanua Levu, Fiji’s second largest island. Some sea walls and coastal infrastructure have been destroyed by the king tides that occur in the transition between El Nino and La Nina weather patterns in the Pacific.

Like many smaller nations, education is seen as a pathway to better health and standards of living. Kiribati faces struggles here. Though the vast majority of children attend primary school, only 20 per cent get beyond year 9 level. There are just six academic secondary schools. Many students fail to reach the standard needed for entrance; others cannot afford the fees or fail to find boarding to allow them to attend far from home. The Church supports a Senior Catholic College in Tarawa and St Joseph’s, a junior college for 135 students at Tabwiroa founded in 1939. Its staff includes religious brothers and overseas teachers sponsored by VICS (Volunteer International Christian Service).

Other Catholic agencies are also active. There is a media service and a busy Catholic Women’s League. A highly-committed group of young people from South Tarawa have formed a Caritas Youth group. Over the last decade they have travelled to outer islands, educating and giving functional help on the ground. Erecting sea walls, showing locals how to plant and maintain mangroves, and how to grow vegetables in very sandy soil are just some of the activities by which they have been supporting local villages.

This is why I feel excited but very challenged. Here is a community undaunted and hopeful in the face of a fearful future.