WelCom August 2017: ‘We are not tourists, we are pilgrims.’ The mantra taught by our chaplain Fr Peter Stojanovic of Griffith NSW, to three busloads of Aussies – and just three Kiwis – in Lisbon in May this year, prepared us firstly for Fatima, where one hundred years ago three shepherd children beheld, above a holm oak in the fields, a beautiful lady clad in ethereal light.

The Pope must have heard we were coming, because he was there too, to celebrate the feast of Our Lady of Fatima with – at a conservative estimate – one-and-a-half-million other pilgrims, many of whom we saw approaching the Chapel of Apparitions painfully, on their knees.

It rained just before Pope Francis joined us to sing and pray the Rosary in a procession lit by our half-million candles, and it rained again after. Portugal’s Atlantic coast means they have showers like we do. Then the next day, in glorious sunshine, he canonised Jacinta and Francisco Marto, the two little shepherds who died of influenza as children. (The cause for canonisation of their cousin Lucia, who died a Carmelite nun, is proceeding.)

Betty, one of our Harvest Tour guides, told me she almost had a panic attack when swept along with the throngs wanting a view of Pope-mobile arriving, but they and the vast crowd in the Recinto da Oracao for the Papal Mass and canonisations on May 13 were so good-humoured and joyful. 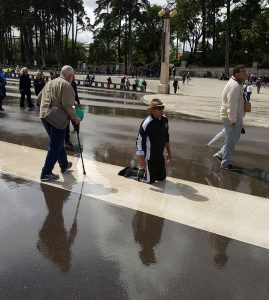 Pilgrims going to Chapel of Apparitions on their knees. 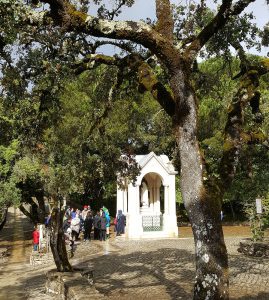 The site of the last Apparition to Lucia. Photos: Supplied

My husband Hamish and I found ourselves surrounded by Goanese Indians who lent me a stool, by Spaniards who lent a fan to the Portuguese teenager who after walking with a group for eight days to get there was unwell, and Germans who lent the teen medical advice.

I still can’t understand how everyone I asked had managed in such a crush to receive the Sacrament, but they did – imagine 170 priests distributing Holy Communion to one-and-a-half-million people.

Our Lady’s message of prayer, repentance and sacrifice, repeated even more urgently at Garabandal – which although not yet officially approved by the Church was another Marian shrine we pilgrims visited – has since dropped out of sight and largely out of hearing. Our Lady told those little children that a friend of theirs who’d recently died would be in Purgatory until the end of time, and showed them a vision of hell so frightening that they prayed the Rosary, as she asked, every day. Imagine even adults being subjected to such impressions at a Sunday Mass today. But it was by praying the Rosary, by sacrifice and penance (!) that they became saints, as we are all called to be – although not of course in expectation of canonisation!

Fr Peter’s mantra, which took Hamish and me from Portugal to Spain and France, and then unforgettably to the Holy Land, will continue to serve us well also in the Diocese of Palmerston North, New Zealand.

Because during the whole course of our lives in this world, Our Lady continues to call us all to be ‘pilgrims, not tourists’.