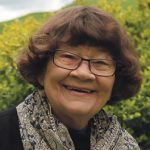 A few years ago, I learned something that started me on a journey of reflection. It is this. Of the three Abrahamic religions – Judaism, Christianity and Islam – the only one to believe in the Fall and Original Sin, is Christianity.

Why was this? I wondered.

I knew the origin of the belief. It was the Garden of Eden Story in Genesis. As a child I was taught that Adam and Eve brought sin into the world by eating the fruit of the forbidden tree.

I always thought their punishment unfair. If our mother had said we could have anything in the kitchen except the biscuits on a top shelf, that tin would be the first thing we’d target. It didn’t seem right that God should make people capable of sinning and then condemn them for giving in to temptation.

Those were the thoughts of an 11-year-old trying to make sense of the Bible.

It was another 30 years before I knew the creation story was written at the time of the Babylonian exile.

At last the Garden of Eden saga made sense. Think of the sub-text to Adam and Eve. The Jews had been taken from their ‘promised land’, their own Garden of Eden, and were captives in Babylon. Their temple in Jerusalem, where they believed God dwelled, had been destroyed by pagans.

Because they believed that every misfortune was God’s punishment for sin, they thought they had done something terrible to deserve this calamity.

When their scribes were writing the story of Adam and Eve, by these captive thoughts they were faced with extinction.

Adam and Eve represented the Hebrew nation. They were given generic names – Adam meaning Man of the Earth and Eve meaning Woman. Some elements of the creation story came from Jewish oral history and some from the Babylonian Gilgamesh tales. The Garden of Eden story is not historical but it is a powerful parable.

In recognising this, there was still something l did not understand. Where did the serpent fit in?

In the Middle East the serpent was – and still is – the symbol of wisdom and healing. In the Old Testament we are advised: ‘Be as wise as serpents and as gentle as doves’. In the gospels Jesus compares himself with the serpent: ‘As Moses lifted up the serpent in the wilderness so must the Son of Man be lifted up that all who look upon him may be healed’.

So why was the snake such a villain in the Garden of Eden story?

The answer came from a Biblical scholar – the Babylonians who were the captors and the hated enemy had golden serpents on the doors of their temple.

What would that have meant to the Jewish captives? Those serpents would probably have been as much a symbol of evil to the Jews as the swastika last century.

With this knowledge, how do we now interpret the story of Eve and the fruit of the knowledge of good and evil? American interfaith scholar Rabbi Rami Shapiro says that Eve looked long and hard before she took the fruit. First she saw that it was delicious. It would satisfy her hunger. But she didn’t eat it for that reason. Then she saw it was beautiful. It satisfied her aesthetic sense. But that didn’t tempt her either. Only when she saw that it would give her wisdom did she eat it. She was willing to risk death to acquire wisdom. ‘And so’ said Rabbi Shapiro, ‘should we all’.

Our Catholic understanding might be a little different, but we have certainly moved on from a flat-earth era and a religion that saw all misfortune as a punishment for sin. The Church’s teaching of a God of unconditional love brings us to a new stage of holistic faith.

But we still carry the same question that burdened the Jews captive in Babylon – why do we have evil in the world?

Evil is a strong word; and evil does exist. Yet when we talk about it, we are usually talking about someone else. And the people out there who are committing evil acts are usually sure they are absolutely right. Why is this?

The world’s religions tackle the question with different parables, each suggesting a personal battle between good and evil.

I come back to our powerful creation parable for the symbol that has meaning for me. The knowledge of good and the knowledge of evil are not in two trees; not even in two fruits. They belong together; we can’t have one without the other.

We can refer to these opposite states in other ways:

It is the tension between these opposite states that can bring us to a larger place in our spiritual path.

The whole fruit represents the way God made us. If we didn’t know evil we would not know good; for it is the shadow that points towards the light.

In our early Christian journey we tried to get rid of those aspects of ourselves that we don’t like; but in a battle of self against self, who ended up the loser?

When we simply see the shadow as light unborn, the work of transcendence becomes part of our faith-filled lives. That ‘me-first’ instinct important to the child, needs to be steered towards the light of selflessness in the adult. This is the way of growth, the Way of Jesus. We emerge from a prison of one, to connection with all creation, connection with God.

So yes, the story of the Garden of Eden is a powerful parable – and for Catholics it illustrates the beauty of the Sacrament of Reconciliation as part of our journey into the light.

I also like the Judaic interpretation of the expulsion from the Garden. They say it is our birth, our soul leaving God to come into incarnation. Then they add: ‘But when we leave the garden, God comes with us’.

Isn’t that also our truth?