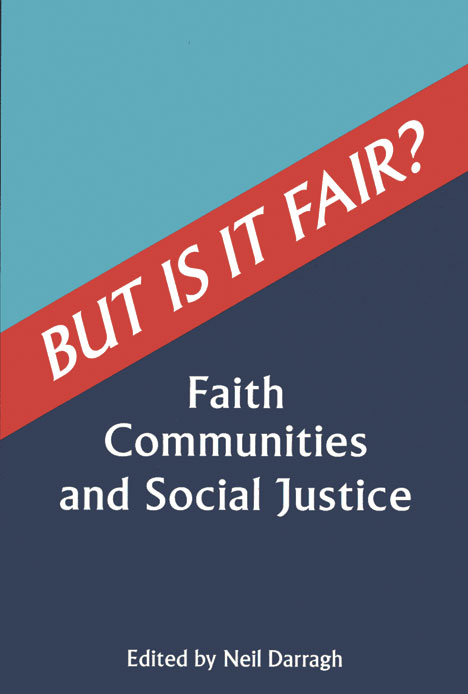 Economist Brian Easton gave this review to a Wellington gathering in April for the launch of the latest book from Accent Publications But Is It Fair? Faith Communities and Social Justice edited by Neil Darragh

The 36 writers are from the faith communities. Their diversity is admirable: there is a wide variety of Christians and there are contributions from a Jew and a Muslim. They come from a variety of backgrounds ranging from ministers of religion to those who are directly supporting the underprivileged or who are teaching. Yet their vocations are essentially religious: I could not help noticing a number were retired priests who were still pursuing the vocation of their working life.Contributors include Mike Noonan, Peter Stuart, former Wel-Com editor Cecily McNeill, Trish McBride and Elizabeth Julian of Wellington and Anna Zsigovits-Mace of New Plymouth.

Their basic conclusion is to answer But is it Fair? with a ‘probably not’ or ‘certainly not’ when referring to society as a whole. To find their precise reasons, you will have to read the individual essays yourself.

Some set standards of social justice from their faith, others talk about their experiences, although in every essay each perspective informs the other.

I suggest, however, that it might be best to read one a day and ponder it, as some people do with sacred texts. And don’t give up – there are some strong contributions towards the end of the book. You would not want to miss them.

As an economist I am acutely aware that many of the prescriptions for improving fairness have little to do with conventional economics. Others do. For instance the market economy is based on competition. Perhaps that undermines some of the values advocated in the book, like cooperation, trust and decency.

Why do we encourage market competition? The economic justification is that it maximises material output. Less aggression probably means a lower material standard of living but it may also mean less stress in life. I notice some of the talented contributors to the book have given up higher paid jobs to pursue their vocation. Ultimately we need a society in which everyone does that, aiming for a lower standard of living.

In fact most New Zealanders have a sufficient material standard of living but does it increase their welfare – their happiness? Their aim is to have a higher income than others in order to be higher in the social pecking order. The economy is driven not so much by the deadly sin of greed, but by the equally lethal sin of envy.

Yet, as many of the authors argue, there is a group in society who have insufficient. Not everyone should restrain their demands for higher material consumption. Perhaps some of us should give up a bit more to enable others to have a more realistic standard of living.

An economist can help articulate the policies which would better meet such goals, but note that I have slipped in the assumption that to make some people better off in material terms others have to be worse off. (This may not be true in spiritual terms.)

Material tradeoffs are at the heart of economics – consequences of the laws of thermodynamics; you don’t get anything in this material world for nothing. It’s too easy to propose policies making some people better off while ignoring that others will be worse off. Almost certainly everybody in this room will have to take a material hit if we want to address honestly the needs of the poorest.

The logic of the book is nicely summarised by the 11 principles enunciated by the New Zealand Catholic Bishops Conference. However, they are universal enough for Protestants, Jews, Muslims,

Buddhists, Hindus or whatever, although each may wish to articulate them slightly differently. They are:

I suggest you write out the list, change the terminology if you like, put one copy on your fridge and use the other as a bookmark. You will find they illuminate almost every page.

Oh, make a third copy to give to your friendly economist or politician. Tell her or him that is how society should be organised and ask them to think about how to do it better.

I congratulate Neil Darragh, his co-authors and those who produced the book and urge you to purchase a copy.

Don’t just leave it on a shelf. Read it, discuss it with friends, share it, try to follow the lessons it advocates, keep reading it until it falls to pieces. Then buy another copy.