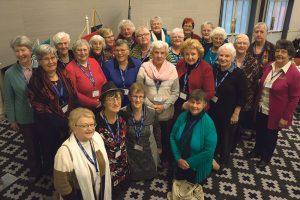 Pictured at the national conference in Christchurch last month are delegates from the NZCWL Wellington and Palmerston North diocesan branches. Photo: Annette Scullion

Catholic Women’s League New Zealand ‘At Home Appeal’ charity is to support the Sophie Elliot Foundation for the year ahead, announced national president Kay Blackmore at the CWLNZ biennial conference in Christchurch, 20–23 July.

CWLNZ established its ‘At Home Appeal’ in the late 1980s to support a national organisation each year. In addition to raising funds, the appeal gives members the opportunity to educate themselves and the wider Church community on issues that directly face New Zealanders.

‘The Sophie Elliot Foundation is committed to enabling young women to identify warning signs and remove themselves safely from abusive relationships, as early as possible,’ founder Lesley Elliot told over 200 CWLNZ conference delegates from around the country.

In 2009, Sophie Elliot was killed in her own home by an ex-boyfriend she had just ended a five-month relationship with. Sophie was a vibrant young, intelligent woman aged 22 when she died. Having just completed an honours degree in Economics at Otago University, she was about to embark on a career at NZ Treasury in Wellington.

Lesley Elliot established the foundation as a legacy to Sophie to raise awareness of all young women, their friends and family to the signs of partner abuse, power and control. ‘After Sophie’s death I realised what she had experienced was an abusive relationship. All the signs were there but no one recognised them for what they were.’

Fellow trustee Bill O’Brien, a retired police detective of 35 year’s police experience, works alongside Lesley Elliot to educate young people in schools about healthy relationships. They have now delivered over 300 presentations around the country.

In her national president’s report to conference delegates Kay Blackburn also announced the appointment of a new publicity officer to help raise CWLNZ’s profile and the Church activities members are involved with.

‘Members nationally have connected with ANZRATH branches and ecumenical gatherings to learn more about trafficking of humans and prevention and awareness measures. We have also taken part in the conversation about euthanasia and made submissions to the Select Committee, and have been active in offering submissions to the Synod on the Family,’ said Kay. Members were encouraged to read Pope Francis’ resulting document Amoris Laetitia – The Joy of Love.

In her presentation entitled ‘Creation and the Practice of Mercy’, keynote speaker Sr Ann Gilroy RSJ gave an in-depth consideration and an holistic insight about creation, spirituality, and the environment. ‘With a change of thinking towards nature, and practices of mercy that include being curious, humble, courageous and committed, mercy opens us to the kinship of creation,’ she said.