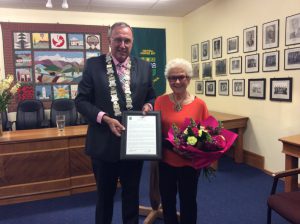 Shirley received the award on 8 September for over 40 years of service to the CHB community – specifically  her work with vulnerable, pregnant mothers and in the areas of counselling and social services. She also worked successfully to bring the Hawke’s Bay Community College – now known as EIT – to rural areas like CHB, to enable tertiary study in the regions.

Shirley, with her late husband Ian, founded the Pleroma Trust, a registered charitable trust based in Otane, to provide support services to the CHB community. Shirley has worked tirelessly for the local community over the many years to ensure free access to support services was available to all. For over 35 years she was Pleroma Trust general manager and managed staff and volunteers to enable the services to remain free. She has been Pleroma Trust Board secretary since its inception and is in this still role today. Both roles have been voluntary.

During the 1970s Shirley and Ian saw a need for support services for pregnant women who wanted to continue their pregnancies to keep their babies or to place them for adoption. After prayer and careful discernment, Shirley and Ian donated their family home and, with the assistance of community members, formed a charitable trust – Pleroma Trust. The pair were passionate that those needing and wanting help should be able to access it without racial, creed or financial barriers. Pleroma Trust is now known as Pleroma Social Services and continues to provide counselling and social services in the CHB community. It forms part of the Pleroma Group, which includes Pleroma Press and Pleroma Christian Supplies – also founded by Shirley and Ian. Shirley is currently the general manager of Pleroma Christian Supplies.